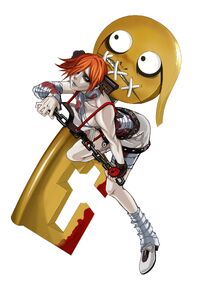 A.B.A is an artificial lifeform, a character within the Guilty Gear fighting game series. Introduced in Guilty Gear Isuka, A.B.A joined the main series in Guilty Gear XX Slash. Due to the fact that A.B.A's story has yet to be explained in canon, she has no known relations or affiliations with any other characters, aside from Paracelsus, her key-type weapon and spouse.