Abra (ケーシィ, Kēshī, Casey in original Japanese language versions) Hocus in English-language beta versions of Pokémon Red and Blue, is vaguely fox-like in appearance. It has two legs and two arms, but is always depicted in a sitting position, and sleeping. Its coloration is gold and brown, and it has a long tail. The brown upper torso seems to be armored, also it appears to wear two pauldrons.

Abra are consistently depicted sitting down, with their eyes closed. They are described as sleeping eighteen hours a day to conserve their psychic abilities.[1] They also constantly use the move Teleport while asleep: changing their location once an hour, teleporting away when they sense danger or are attacked, and creating illusory copies of themselves.[1][2][3][4]

Abra can be caught in the wild in all Pokémon versions - but due to its only attack being Teleport, which ends the battle, it is harder to catch than most other wild pokémon and must be put to sleep, frozen or paralyzed in order to prevent it from using Teleport, or it must be caught at full HP on the first turn- all of which are substantially difficult, due to its high speed rating. (This has changed in the advance generation of games, with the new attack Taunt, which prevents non-damage causing attacks such as Teleport.) Its major qualities are its great speed and strong special statistics, but it is physically weak because of its low Attack and Defense.

Abra evolves into its second stage, Kadabra, upon reaching level 16. After evolving, it is able to learn attacks by itself, which it cannot when it is an Abra.

Abra was the shop keeper in "Hey you, Pikachu!" He sells three random items for Pika Points.

Abra is also in the Mystery Dungeon games for DS and GBA. It only attacks using the regular teleport,and the occasional "default A" tackle attack.

In Colosseum and XD: The Gale of Darkness, Abra was the Pokémon that teleported you back to the main desk on Mount Battle, allowing the trainer to effectively exit the huge challenge whenever they wished.

In the Pokémon anime, Abra makes for one of the greatest showdowns in the series. Its first important appearance is in Episode 21, Abra and the Psychic showdown. Ash Ketchum and his companions arrive in Saffron City and are caught in one of Team Rocket's devious traps. They are trapped in a doorless room, but a little girl appears and saves them and Pikachu, who the villains had captured.

After that, Ash moves to Saffron City's gym, intending to win another Gym Badge for his collection from the leader, Sabrina. He does not heed the advice of other trainers in the Gym, and he proceeds to challenge Sabrina. To his surprise, the little girl who saved them from Team Rocket is sitting on the Gym leader's lap.

The girl notifies them that she agrees to fight with them for the badge, but if they lose, they must "play with her". Not sensing any danger, Ash agrees. Sabrina uses Abra as her pokémon, and Ash laughs as he thinks she intends to use a sleeping Pokémon. However, Abra proves to be a match for Pikachu, avoiding the electrical Pokémon's attacks. Finally, Abra evolves into Kadabra and Sabrina wins the fight. With her psi abilities, she proceeds to transform them into little toys, and the meaning of her words dawns finally on them.

But in the end, they are saved from Sabrina by a mysterious man who teleports them out of the gym.

Abra's other anime appearances were bit parts as a referee for a fight between Machoke and Hitmonchan for a Pokémon Show upon a ferry, and he was also one of the three Psychic Pokémon to attempt to take down Team Rocket's giant Gengar bot, but was captured. Despite the fact the latter was only a bit part, Abra actually does more in this episode(The Psychic Showdown) than he does in episode 21, where he almost instantly evolves to defeat Pikachu.

Also, Pike Queen Lucy has an Abra, which reminds her of Brock, who she has a crush on.

In Pokémon Adventures, the president of the fan club owned an Abra, but it was kidnapped by Lt. Surge. When Red defeats Surge, the President gets his Abra back, but it has evolved into a great big Alakazam. The president faints and cries, because he only loves cute little Pokémon.

In The Electric Tale of Pikachu, Sabrina takes Ash on with Abra, who defeats Pikachu. A week later, however, Sabrina is found laying unconscious and Abra joins Ash and Pikachu to try and defeat the Haunter that has stolen Sabrina's soul. Sabrina combines her psychic energy with Abra's to neutralize Haunter and defeat it. 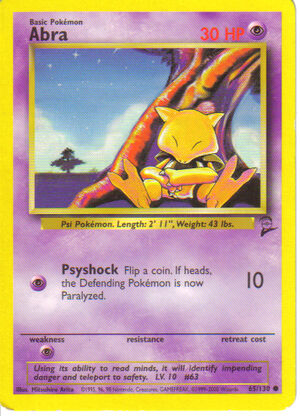 In the Pokémon Trading Card Game, Abra has made multiple appearances. Abra tends to be a weak card, usually with 30 HP. It appears in the following sets: