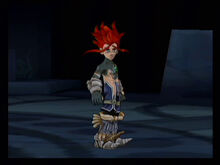 He will cut you.

Abyssion is the name of a secret boss in the Action RPG, Tales of Symphonia. He is widely recognised as the hardest boss in the game, due to his high HP and fast, powerful spells. He uses every Devil's Arm weapon, meaning he uses the weapon type of every one of your characters.

Initially, Abyssion appears to be an ally who asks you to seek out the Devil's Arms, evil weapons, so that he may seal them away. When you gather them, he betrays you and reveals that he is using the weapons to revive an ancient evil.