In video gaming parlance, achievements, also sometimes known as a trophies or challenges, are meta-goals defined outside of a game's parameters. Unlike the systems of quests or levels that usually define the goals of a computer or video game and have a direct effect on further gameplay in the form of unlocking other quests or special features, the management of achievements usually takes place outside the confines of the game environment and architecture. However, achievements may also provide direct benefits to gameplay; since achievements were included with World of Warcraft in the second expansion Wrath of the Lich King, completing achievements could grant the player a title, companion pet, mount, toy, or other such cosmetic luxury.

Achievements are included within games to extend the title's longevity and provide players with the impetus to achieve more than simply complete the game and find all of its secrets. They are effectively arbitrary challenges laid out by the developer to be met by the player. These achievements may coincide with the inherent goals of the game itself, such as completing a level, with secondary goals such as finding secret power-ups or levels, or may also be independent of the game's primary or secondary goals, such as playing a certain number of times, viewing a video, beating a certain number of online opponents or completing a level in a certain amount of time. Certain achievements may refer to other achievements - many games have one achievement that require the player to have gained every other achievement.

Unlike secrets, which traditionally provided some kind of direct benefit to the player in the form of easier gameplay (such as the warp pipe in Super Mario Bros.) or additional gameplay features (such as hidden weapons or levels in first-person shooters like Doom) even though there might have criteria similar to achievements in order to unlock, the narrative-independent nature of achievements allows them to be fulfilled without needing to provide the player with any benefit or additional feature. In addition, the achievements used in gaming are usually visible outside the game environment (for example, on the internet) and form part of the online profile for the player (Gamertag for Microsoft's LIVE network, for both Xbox 360 titles and Games for Windows - LIVE supported PC Games, and PSN ID for PlayStation Network (PSN)). The motivation for the player to gain achievements lies in maximizing their own general cross-title score (known as Gamerscore on LIVE and Trophy Level on PSN) and obtaining recognition for their performance due to the publication of their achievement/trophy profiles.

Some implementations use a system of achievements that do provide direct benefits to the gameplay, although the award is usually not congruent with the achievement itself. One example of such an implementation is found in the later Call of Duty titles, known here as challenges. Challenges here may include a certain number of headshots or kills and are rewarded not only with the completion of the achievement but also a bonus item that can be equipped. 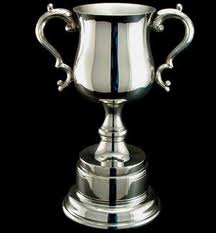 A trophy, because "achievement" doesn't have a shape.

Although individual games on various platforms have implemented systems of achievements, the original implementation of the achievements system as popularized is widely considered to be Microsoft's Gamerscore system, introduced in 2005. Microsoft extended Gamerscore support to the Games for Windows - LIVE digital platform in 2007 by including support for achievements in Halo 2. Support for Gamerscore was continued by the Xbox One in 2014. In 2008, Sony Computer Entertainment and Valve Software followed suit by offering trophies via PlayStation Network for the PlayStation 3 and Steam Achievements for some PC titles respectively. To date, Nintendo has not developed any kind of central achievements system for the Wii or Nintendo DS, but a few selected games such as Metroid Prime 3: Corruption and Wii Sports Resort do implement their own systems of achievements.

Many PC games also have their own internal achievements, such as the games in the Mass Effect series.