Active Enterprises Ltd. is a defunct American video game developer headquartered in Miami, Florida[1] that was active in the early 1990s. Their best known game, and the only title officially released by the company, was the infamous Action 52 multicart for the NES and Sega Genesis video game consoles.

Active Enterprises was formed by Raul Gomila and Vince Perri in 1989, and was founded by the genesis of the idea behind Action 52, a collection of 52 original games on one cartridge which was developed and published internally and eventually released for the NES in 1991. The game was not licensed by Nintendo.

Promising 52 "new and original exciting games", Action 52 was initially sold for the comparatively high price of $199 USD (or "less than $4 for each game"), and was backed up by a promotional contest which offered a grand prize of $104,000.[2] However, the title soon became notorious for the poor quality of its games and their numerous bugs and glitches, while the contest, which involved reaching a stage in the game Ooze became essentially unwinnable due to these same factors. Nonetheless, in 1993 Active Enterprises contracted Farsight Technologies to port Action 52 to the Sega Genesis and the SNES, and develop the sports game Sports 5. Only Action 52 for the Genesis was released out of these 3 games.

Action 52 also included a game titled The Cheetahmen, which Active Enterprises trademarked in 1992 and hoped to turn into a Teenage Mutant Ninja Turtles-inspired media franchise consisting of action figures, a comic book series and even a television cartoon series. A sequel, Cheetahmen II was developed but never released.

By late 1994, Active Enterprises had left the video game industry but not before making a final Consumer Electronics Show presentation, which included promotion for a third Cheetahmen game and announcing an ambitious handheld game console, the Action Gamemaster, which promised compatibility with NES, SNES, Genesis and CD-ROM games via separately sold adapters.[3][4][5]

Contrary to popular opinion, Active Enterprises reportedly continued trading in the computer technology sector after their short-lived foray in the video game industry.[6] During its years in business, the company based themselves in Florida and was headquartered in The Bahamas.[7] 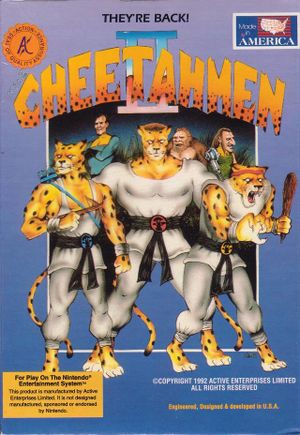