An old friend (And General of the Galactic Federation) from Samus Aran's past. First appeared in Metroid Fusion. One of the few NPC characters in the Metroid series.

Samus was once in love with Adam. At some point on a mission with Samus, he sacrificed his life for the greater good (details are vague). However, in Metroid Fusion, Samus discovers that the Galactic Federation stores data logs of the minds of great generals, which apparently Adam was. His mind has been restored on the onboard computer of Samus's new ship that she received from the Galactic Fed when her old one was destroyed. 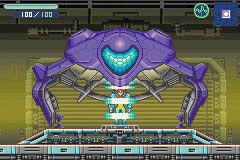