Advance Wars is a turn-based strategy game developed by Intelligent Systems and released in North America for the Game Boy Advance in 2001. In Japan, the game only became available recently as part of a bundle with the sequel, Advance Wars 2: Black Hole Rising. It is the first of the Nintendo Wars series to reach North America and Europe.

Advance Wars is often heralded for its deep yet accessible gameplay and unique art style. 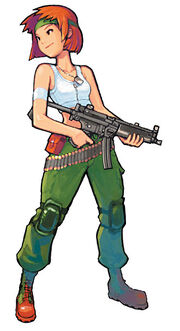 Sami, one of the COs

When you first play Advance Wars, the only COs available to you are Andy, Max, and Sami. However, as you progress through the game, you will be able to unlock other COs for use in the War Room and in Versus mode. The ways to unlock them are:

Note that after fulfilling the above conditions, that campaign must then be completed. After that, the CO(s) appears in Battle Maps for purchase.