Aerodactyl (プテラ, Putera, Ptera in original Japanese language versions) is one of the 649 fictional species of Pokémon creatures from the multi-billion-dollar Pokémon media franchise – a collection of video games, anime, manga, books, trading cards and other media created by Satoshi Tajiri. Aerodactyl is a prehistoric Pokémon who is known for being a fast attacker, so it is used by many strategical players.The name "Aerodactyl" is derived from the prefix "aero-", which means air (as in aeroplane), and pterodactyl, because of both Aerodactyl's similar appearance to the pterodactyl and prehistoric status.

Aerodactyl is an assumed diurnal carnivore, though in the episode "Putting the Air back in Aerodactyl" it is shown eating fruit. Aerodactyl is an ancient Pokémon from the prehistoric age. It was first regenerated from genetic material extracted from amber. It is based on the Pterodactyl. It also slightly resembles Rodan. It is imagined to have been the king of the skies in ancient times. It captures its prey with its talons and brings it to its nest. However, if the prey resists, it may use its razor-sharp teeth to immobilize it. When attacking its enemies/opponents, it goes for the throat with its saw like fangs. In as much as it was fossilized, its rough skin became rock-hard and its wing muscles grew stronger due to overweight. It uses its broad wings to glide through the skies.

Aerodactyl has an excellent Attack stat and a Speed stat that is very high (among the top 1% of all Pokémon). It is only outsped by Electrode and Ninjask. That enables it to act as a physical sweeper, a fast Pokémon whose role is to strike fast and hard with physical attacks to decimate the opponent's team. Aerodactyl is available in Red, Blue, Yellow, Gold, Silver, Crystal, FireRed, and LeafGreen. In all of these games (with the exception of Gold, Silver, and Crystal), the player can find an Old Amber in Pewter City's museum. Once the player has access to Cinnabar Island, the player can deliver the Old Amber to a scientist, who then revives Aerodactyl from it. This method of reviving Pokémon is used for several different fossilized Pokémon. In Pokémon Gold, Silver, and Crystal, an Aerodactyl can be received by trading a Chansey for it on Route 14. You can also find Old Amber very rarely in the Underground in Pokémon Diamond and Pearl. Aerodactyl appears as a playable character in Pokémon Mystery Dungeon in both Game Boy Advance and Nintendo DS versions. The player can befriend it near the end of the game at several different areas.In competitive play, Aerodactyl is mostly used as a physical sweeper. Due to its massive speed, respectable attack and Rock Head ability (negating recoil damage from such moves as Double-Edge), Aerodactyl has the potential to pull off a late game finish, and can quickly turn the tide of a battle. Aerodactyl's greatest setbacks, however, are its low defense and low special defense. This makes Aerodactyl extremely susceptible to ice attacks.

Aerodactyl has few significant anime appearances. Its first appearance was earlier in the series, in which Aerodactyl is awoken by Team Rocket while they attempted to blow up a mountain. In another episode, Gary Oak invites Professor Oak and Tracey Sketchit to an island where Aerodactyls and other fossil Pokémon lived in ancient times, to show them an Aerodactyl that he and his fellow researchers had recently cloned. Butch and Cassidy, members of Team Rocket, had also learned of this Aerodactyl and attempted to capture it. In the end, Gary defeated Team Rocket and protected the Aerodactyl. In Pokémon Heroes: The Movie, two members of Team Rocket named Annie and Oakley had de-fossilized an Aerodactyl and used it to cause mayhem throughout the city of Alto Mare.Aerodactyl also appears in the episode "The Big Charge Of Ancient Pokemon!"

Red obtains an Aerodactyl from a resurrected piece of Old Amber. He has since then used it extensively for aerial transport and combat. 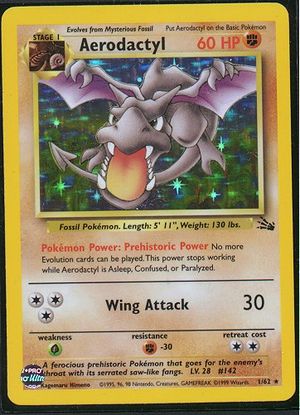 Aerodactyl, as seen in the Pokémon Trading Card Game

The Pokémon Trading Card Game is a collectible card game similar in goal to a Pokémon battle in the video game series; players must use cards (with individual strengths and weaknesses) in an attempt to defeat their opponent by "knocking out" all of his cards.[1] The game was first published in North America by Wizards of the Coast in 1999, until Pokémon USA, Inc started publishing the series in 2003.[2] Aerodactyl first appeared in the Fossil set. He later appeared in the Neo Revelation and then later in the Skyridge set. In all three of these sets, it is a Fighting-type card. Aerodactyl later appeared in both the EX Sandstorm set (as Aerodactyl EX) and EX Legend Maker as a Colorless type, and then in the EX Holon Phantoms (as Aerodactyl δ) as a fire type.