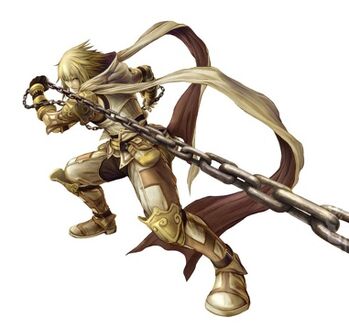 Aeron is the protagonist of Pandora's Tower and the only character in the game you can play as. He is a soldier from the Kingdom of Athos.

When he first met Elena in the year 508, three years before the events of this game, he had been wounded in the war. Elena found him lying unconscious, and she took him into her home in Elyria. Her parents were worried because the war was going on and they could get in trouble, but Elena helped him all the same. Since then, Aeron has spent some time living with her in Elyria, even though it was dangerous for him with the war on.

The relationship between Elena and Aeron is an unlikely one. Elena is from the Kingdom of Elyria, and the two kingdoms had been at war for a long time. The war had only just ended, and some skirmishes are still going on.

After Elena is cursed at Elyria's Harvest Festival, Aeron must help her by defeating the Masters in 13 different towers to obtain their flesh. He needs this flesh to give to Elena to remove the curse that will otherwise turn her into a beast. His main weapons are a sword and the Oraclos Chain, a weapon that can also be used for other purposes. He can find other weapons in the towers or upgrade them by talking to Mavda in the Observatory.