The planet-setting of Metroid Prime 2: Echoes, Aether is home of the Luminoth race. Samus Aran is called to Aether by a Galactic Federation distress beacon, and crash-lands on the planet after her ship is damaged in atmospheric turbulence. She finds that the Federation troopers, dead on the planet, were pursuing a Space Pirate frigate - but there's something more unsettling than Pirates around. 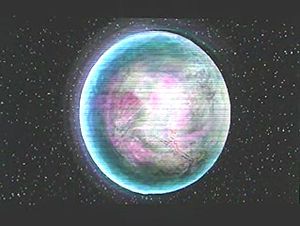 The Light side of Aether 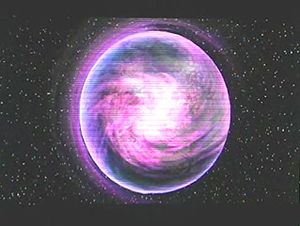 The Dark side of Aether

The Luminoth tell the story of Aether being struck by a mighty meteor, infested with Phazon, which split the planet into two - Light Aether and Dark Aether. The Light side, the planet as it originally existed before the Phazon meteor impact, is inhabited by the Luminoth, and the Dark side, an almost perfect mirror, came to be inhabited by the Ing, a mischievous insect-like race of creatures spawned by the meteor.

The Ing are driven by an insatiable hunger to destroy and consume energy, energy which is maintained in mystic temples and sustains the planet; through connivery the Ing managed to drain much of the Light side's energy, putting the Luminoth's homeworld in jeopardy. If one side's energy is drained, the other will completely take over the planet. Presumably, Ing have a hard time traveling into the Light side from Dark Aether. However, they have little trouble possessing the dangerously-curious Space Pirates, as well as other creatures, in order to inhabit the Light side through them.

Samus is tasked by the last remaining Luminoth, U-Mos, to venture into Dark Aether to retrieve the energy for Light Aether. However, the very atmosphere of Dark Aether is harmful to anything but the Ing. Samus uses light beacons, set up by the Luminoth at the height of their conflict with the Ing, to protect herself from the dark energy (later using suit upgrades to resist the atmosphere).

The Light/Dark dynamic was (supposedly) an idea for the game from the beginning, but Retro Studios hired one of the game designers from The Legend of Zelda: A Link to the Past to help them develop the two-world dynamic.