Aipom (エイパム, Eipamu?, Eipam in original Japanese language versions) is a fictional species of Pokémon from the Pokémon Franchise – a series of video games, anime, manga, books, trading cards and other media created by Satoshi Tajiri.

Aipom's name is derived from the words ape, because it resembles a monkey, and palm, which refers to its hand-like tail.

Aipom resembles a purple squirrel monkey, despite its name calling it an ape, with its face forever frozen in a maniacal grin that can be described as rictus and a blank stare from its round eyes (possibly inspired by the blank stare on toy cymbal monkeys). However, it can move its face. On its thin tail is a three fingered hand. It is possibly inspired by the Aztec legendary beast Ahuizotl. It also somewhat resembles the Cheshire Cat character from the Alice in Wonderland series by author Lewis Carroll.

Aipom is not aggressive by nature and will attempt to tire its natural opponents through dexterous dodging of the opponent’s attacks in hope that the enemy will be discouraged and leave. Otherwise, if the enemy is persistent, the Aipom will try to retreat, but if it is unable to, it will attack by diving at its opponent from the trees.

Aipom is an diurnal omnivore, though it mostly prefers fruit. It will occasionally eat insects if fruits are unavailable. Aipom's most notable feature is its tail. The tail ends in a large hand-like appendage that is very dexterous—in fact, its tail-hand is used so often, that an Aipom's tail is usually a more dexterous appendage than its arms. The grip of its tail-hand is strong enough to allow it to hang from tree branches for extended periods of time. Additionally, that tail provides both propulsion and balance while Aipom leaps from tree to tree.

Aipom's shiny form consists of pink fur and a slightly pinker face. Recently, in Pokémon Diamond and Pearl, a female Aipom's tuft of hair on its head is larger.

Aipom can be found in nine games. In Gold, Silver, and Crystal, Aipom could be found by using Headbutt on trees. In Pokémon Colosseum, it can be snagged from Cipher Peon Cole in the Shadow Research Institute. In FireRed/LeafGreen versions, it was rumored to be in the Altering Cave, as its programming was found there, but the entire cave is unusable due to the discontinuation of the E-Reader. In Emerald, it is found in the special Safari Zone extension. In Diamond and Pearl, Aipom can be found by spreading Sweet Honey on certain trees, though he is very rare. (Much like using headbutt on trees in G/S/C.)

Aipom can have one of two special abilities: Run Away, which allows it to escape from any battle except when trapped (such as with the move Mean Look or the ability Arena Trap) or when the battle is an official battle of the Pokémon League; or Pickup, which gives it a one-in-ten chance per battle of finding an item.

In Pokémon Gold and Silver and Pokémon Crystal, Aipom learned eight abilities; six Normal-type, one Ground-type, and one Psychic-type. Of these, three (Scratch, Fury Swipes, and Swift) are physical attacks, three (Tail Whip, Sand-Attack, and Screech) are stat-draining abilities, one (Baton Pass) is a unique move, and one (Agility) is a stat-boosting move. In Pokémon Ruby and Sapphire, two moves were added (Astonish, a Ghost-type energy attack, and Tickle, a Normal-type stat-draining ability), and the levels that particular moves were learned were slightly tweaked.

Aipom is one of several Pokémon introduced in Gold/Silver with mid to low range stats and no evolutions. Aipom's Special Attack is in the bottom 20% of all Pokémon.

In Pokémon Diamond and Pearl Aipom can evolve into a pure Normal-type Pokémon called Ambipom.

Aipom's most notable appearance was in Pokémon 3: The Movie. There, an Aipom was used in battle by the trainer Lisa, whose advice to head to Green Fields eventually lead to them meeting the antagonist of the movie.

During episode 455 (Slaking Kong!), a large number of Aipom and other monkey-like Pokémon appeared in a mountainous region that was home to a gigantic Slaking. One of these stole Ash's hat, and would follow the group to the Kanto Grand Festival. There, it stole his hat again, and after Ash got the hat back, Aipom wound up hanging around with their group. Finally, in episode 458 (Channeling the Battle Zone), Ash battled and captured the Aipom, who was revealed as a female in the following episode. Ash's Aipom is quite attached to her trainer, getting incredibly jealous when she sees Pikachu on Ash's shoulder (compare with Chikorita). Aipom has the distinction of being the only Pokémon (aside from Pikachu) that Ash brought with him to Sinnoh, although inadvertently. Ash's Aipom knows many powerful attacks including Focus Punch, Swift, and Double Team.

In the Episode "Throwing The Track Switch", Ash and Dawn traded their Pokémon. Ash traded Aipom to Dawn for her Buizel (a water type). in "Journey To The Unown", Aipom evolved into Ambipom after learing Double Hit.

has an Aipom named Ataro. 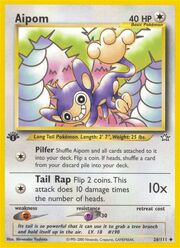 Aipom has appeared four times in the card game as a colorless Basic Pokémon: