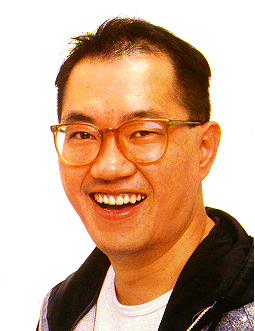 Akira Toriyama (鳥山明, Toriyama Akira?) (born on April 5, 1955, in Kiyosu, Aichi, Japan) is a widely known and acclaimed Japanese manga artist known mostly for his creation of Dragon Ball in 1984. It is difficult to pinpoint the source of Toriyama's artwork inspiration. He admires Osamu Tezuka's Astro Boy and was impressed by Walt Disney's One Hundred and One Dalmatians, which he remembers for the great art. Jackie Chan's early movies had a noticeable influence on Toriyama's stories.

He debuted in 1979 with the story Wonder Island, published in Weekly Shōnen Jump, and first gained popularity for the anime and manga series Dr. Slump, originally serialized weekly in Shōnen Jump from 1980 to 1984. In 1982, he won the Shogakukan Manga Award for Dr. Slump for best shōnen or shōjo manga series of the year.

In 1984, Toriyama was responsible for developing Dragon Ball which was initially serialized in Weekly Shōnen Jump. It became an instant accomplishment—primarily selling over 35,000,000 copies in Japan, Dragon Ball eventually became a record-breaking best seller with over 120,000,000 copies sold. Aside from the Japanese fame, the series was equally successful internationally as well, including in Europe (1988), Canada (1996) and Latin America.

Toriyama is mostly acknowledged for his major hit Dragon Ball. This work was one of the linchpins for what is accepted as the Golden Age of Jump. Its success encouraged Toriyama to continue working on Dragon Ball from 1984 to 1995. During that eleven-year period, he produced 519 chapters, collected into 42 volumes. Each volume has an average of 200 pages. Moreover, the benefit of the manga led to three anime adaptations, numerous feature-length animated movies, several video games, and mega-merchandising. Though Toriyama had been planning to end Dragon Ball for a long time, his editors agreed to let him end the manga so he could "take some new steps in life," as he put it. The third anime adaptation, Dragon Ball GT, was not based on his manga; however, Toriyama was still involved in the project by supervising its production, although in a limited way. The Dragon Ball anime, including installments that followed, spawned over 500 episodes made in Japan, and are produced and licensed for North America and Australia by FUNimation.

Toriyama's clean line and design sense led to jobs designing characters for the phenomenally popular Dragon Quest series of role-playing games (formerly called Dragon Warrior in North America). Toriyama has also served as the character designer for the Super Famicom RPG Chrono Trigger, the fighting game Tobal No. 1 for the PlayStation (as well as its sequel, Tobal 2, released only in Japan), and the Mistwalker Xbox 360 exclusive RPG Blue Dragon.

His works after Dragon Ball tend to be short (100-200 page) stories, including Cowa!, Kajika, and Sand Land, as well as one-shots, like Neko Majin.

Toriyama worked on a one-shot called Cross Epoch, in cooperation with One Piece creator Eiichiro Oda. The story is a short crossover that presents characters from both One Piece and Dragon Ball respectively.

Recently, Toriyama and his studio have begun developing Dragon Ball Online, a follow-up to the Dragon Ball manga, with Bandai Namco Games and NTL for release in South Korea and Japan. The game will act as a direct sequel to the manga, and Toriyama will be supervising all aspects of the game, from storyline and setting to character and location designs. In a press conference in South Korea on February 14, 2008, Kazuhiko Torishima, the director of Shueisha (and Toriyama's original editor), stated that Toriyama had immersed himself in creating character designs and providing editorial supervision for the game for the past five years.

Toriyama's studio is called "Bird Studio", which is a play on his name, "tori" meaning "bird". Toriyama does almost all of the work in Bird Studio; his assistant does mostly backgrounds. The studio has not been very active over the last few years and has only done occasional one-shots.

In an interview conducted in 2007 with Shōnen Jump, Toriyama revealed that he does not consider what is to occur in proceeding chapters of his stories.

In 2009, Toriyama was commissioned by Avex Trax to draw a portrait of Japanese singer, Ayumi Hamasaki, it was printed on the CD of her single Rule/Sparkle.

Toriyama announced that his help with the making of the Blue Dragon anime may very well be his final assistance in anime. In his own words, he said: The offer to direct an animated version of Blue Dragon came in February of last year [2006]. Studio Pierrot approached me regarding it. I knew that Sakaguchi had been working on assembling staff to produce a game, although at the time Blue Dragon hadn't yet been formally announced. According to the materials, it was to be a fantasy world like Lord of the Rings, with a detailed world view and story.This may be my final anime, I'm a little worried (about it). There's incredible pressure, but at the same time, there's a sense of accomplishment — that it's worth doing. Blue Dragon will be a masterpiece, not simply because I'm working hard on it, but because the staff is expecting nothing less. Blue Dragon began airing on TV Tokyo on April 7, 2007, featuring a different vocal cast than that used for the game. It is scheduled for 51 episodes. On April 16, 2007, Viz Media secured the license for the anime adaptation and was originally set be released in both North America and Europe later on in the year, but that did not happen. The anime premiered in the United States, on Cartoon Network, on March 28, 2008.