Alakazam (フーディン, Fūdin, Foodin in original Japanese language versions) loses the thick tail it once possessed as Kadabra (which might explain why it is 19 pounds lighter than Kadabra). It stands on two legs and always holds two silver spoons - this can be taken as a reference to psychic Uri Geller, who can allegedly bend spoons with the power of his mind. Parts of Alakazam's body are brown, but its predominant coloring is gold. Alakazam wears a long gold moustache - nonetheless, some Alakazam are female, though in Pokémon Diamond and Pearl, females have dramatically smaller moustaches, while the males have longer ones.

Alakazam are described as extremely intelligent - with an IQ of over 5,000 they can outperform supercomputers and can memorize anything.[1][2] Alakazam use their superior intelligence to immediately identify their opponents' weaknesses and gain the edge in battles.[3][4] This intelligence and superb memory are said to come from the fact that Alakazam's brain cells never stop multiplying [5][6] - as a result, the overly large head must be supported by its telekinetic powers.[7] In fact, Alakazam use their psychic abilities for all movement, as their muscles are too weak.[8] Also their senses are incredibly high: just by closing its eyes it can heighten all the other senses dramatically.

Alakazam must be evolved from a Kadabra by trading it to another Pokémon game. It will evolve immediately once the trade is completed.

Alakazam is the leader of a gold-ranked rescue team in Pokémon Mystery Dungeon for the Nintendo DS and Game Boy Advance. His team is made up of himself, Charizard and Tyranitar. He is the first to suspect that the main character is the cause for the natural disasters, and believes that the only solution is to eliminate the character (and his/her partner, for that matter). Later, after Ninetales clears the protagonist's name, Alakazam's team goes underground to quell the mighty Groudon, but fails later on and is rescued by the player. He also helps the protagonist, along with Xatu's help, to get to Sky Pillar to get Rayquaza's help after hearing about a meteor that may destroy the world.

Alakazam has not had any prominent roles in the continuity of the Pokémon animé and movies. It was glimpsed once as a Pokémon attempting to battle Mewtwo at the Viridian City Gym, both owned by Giovanni, in Pokémon: The First Movie. Alakazam's spoons were bent by Mewtwo's psychic powers and thrown against the wall, knocking him out. Another role involved a giant Alakazam battling a giant Gengar in episode 74, "The Ancient Puzzle of Pokemopolis". This episode is also the first to feature Alakazam on Ash's pokedex. Luana, the Gym Leader of Kumquat Island, used an Alakazam alongside a Marowak against Ash in a Gym Battle.

In "The Ties that Bind", Alakazam was one of the Pokémon seen in Gary Oak's profile.

Anabel, the second most powerful Frontier Brain next to Brandon, has an Alakazam.

Alakazam was also featured in the first episode of the NA dubbed Battle Frontier episodes, where he and a multitude of psychic Pokémon are left behind in an old miner town with some rival Ghost Pokémon. Alakazam is seen many times, but the "main role" of the episode is Abra's.

Most recently, Alakazam was owned by Kengo, Dawn's childhood friend. Kengo also has a Prinplup.

Alakazam debuts in Buzz Off, Electabuzz! when Red frees the Pokémon kidnapped by Lt. Surge; instead of his beloved Abra, the President of the Pokémon Fan Club finds himself with a not-so-cute Alakazam.

In Volume 9, after Red's aptitude test to be the Gym Leader of Viridian City, a swarm of wild Pokémon suddenly appear outside the Gym after being attracted by Pokémon March music, one of which is an Alakazam. Green captures all of them with his Scizor. Alakazam is seen again in Volume 13 as part of Green's team for the Gym Leader faceoff, and again in Volume 24 as one of the Pokémon in Viridian Gym. It defeated Chuchu easily using a combination of Role Play and ThunderPunch. 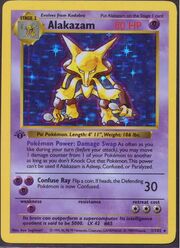 Alakazam has had six cards:

Alakazam was one of the most popular Psychic-type cards in the early stages of the game. Its original appearance in Base Set sported the Damage Swap Pokémon Power, which allowed any damage on the player's side of the field to be arranged in any way. Alakazam made a potent defensive combo with the original Chansey in the same set.