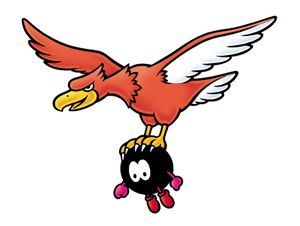 An Albatoss, トンドルー (tondoru?), is an enemy that appears in Yume Koujou Doki Doki Panic and its international version, Super Mario Bros. 2. To attack, these birds drop Bob-ombs at Mario and his friends. The method of beating World 6-2 is to ride an Albatoss' back, which can be done by jumping on it when this enemy flies at a low altitude.

The name Albatoss is a combination of the Albatross bird, and the word toss, due to its attack method.