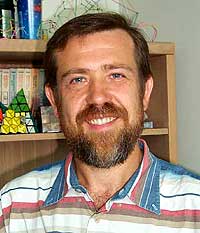 Alexey Leonidovich Pajitnov (rus. Алексей Леонидович Пажитов), regularly Aleksei Leonidovich Pazhitnov, who was born in 1956, is a computer engineer from Russia now living in the United States. He is the father of the massively popular puzzle game Tetris, which he created in 1985 while working for the Dorodnicyn Computing Centre at the Soviet Academy of Sciences, a government-funded research and development facility. Pajitnov had a passion for mathematics, puzzles, and computer software, which led him to creating a game that still shapes the industry two decades later.

Pajitnov created Tetris with the help of Dmitry Pavlovsky and Vadim Gerasimov in 1985. The game, first available in the Soviet Union, appeared in the West in 1986 as an unlicensed PC version from publisher Spectrum HoloByte. Pajitnov also created the lesser known sequel to Tetris, entitled Welltris, which has the same principle but takes place in a three dimensional environment where you see the "board" from above. Screen shots are available here. After Pajitnov signed his rights over to the Soviet government for ten years, they started licensing the game via an organization called Elorg, short for Elektronorgtechnica. Pajitnov, together with Vladimir Pokhilko, moved to the United States in 1991 and founded The Tetris Company with Henk Rogers.

He helped design the puzzles in the Super NES versions of Yoshi's Cookie and designed the game Pandora's Box, which incorporates more traditional jigsaw-style puzzles. In 1996, the rights to Tetris reverted to Pajitnov.

He began working for Microsoft in October 1996. He was employed in the MSN Games group, working on such titles as Microsoft Entertainment Pack: The Puzzle Collection and MSN Mind Aerobics. Pajitnov's enhanced version of Hexic, Hexic HD, was included with every new Xbox 360 Premium package. He left Microsoft in 2005.

On August 18, 2005 WildSnake Software announced Pajitnov would be collaborating with them and releasing a new line of puzzle games.

On March 7, 2007, Alexey Pajitnov received the Game Developers Choice Awards First Penguin Award. The award was given for pioneering the casual games market.[1]