The player can create their character as male or female, any of ten races and any of twenty character classes, giving 400 possible combinations requiring widely varying playing styles. During adventures, a player is likely to explore many different dungeons and complete multiple quests. Which quests the player chooses will likely depend on their character and on whether they are lawful or chaotic. The alignment of a player also effects which benefits (or curses) their god may bestow upon them, and how they are treated by NPCs. Ancient Domains of Mystery has a quest-centric, plot driven structure that borrows as much to old adventure games such as Zork (indeed, there are even Grue references to be found) as it does to the "purer" hack-and-slash of sister games such as Angband.

Ancient Domains of Mystery was written by Thomas Biskup, is currently at version 1.1.1 and can be downloaded from the official website. Although Ancient Domains of Mystery is freeware (technically postcardware), unlike most roguelikes, its source code is not available. However, some of the game's underlying equations and mechanics have been deduced via careful experimentation by players.

Biskup did not release the source because:

As is usual for roguelike games, Ancient Domains of Mystery randomly-generates its dungeons. Die and start a new game, and you will find different and unfamiliar dungeon levels (in the same places on the overworld). However, as long as the player's character stays alive, dungeons use persistent levels (as they do in Hack). If the hero leaves a dungeon level and returns later, the same level reappears. Save files contain all dungeon levels already visited.

The dungeon tends to contain rooms, hallways, and doors, but can also have special features such as shops. Stairs connect adjacent levels.

There are four steps to creating a new character for starting a new game.

As you gain experience points by slaying monsters, you will level up, allowing you to boost three skills, and at times, to add new talents.

Ancient Domains of Mystery uses the "numpad" method; one uses the numbers 1 through 9 on the numeric keypad to move in eight directions. For players who have keyboards without a numpad, especially laptop keyboards, this can be difficult. There is no option to use "yuhjklbn" control as in Rogue.

As in other roguelike games, one can attack a monster in melee by trying to move onto its square. 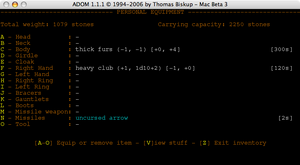 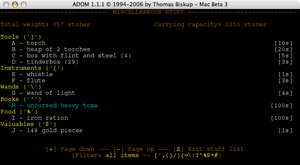 Unreleased, but JADE "Java-based Ancient Domains Engine" is under development.

This is the native Microsoft Windows port; one can also use the MS-DOS version.