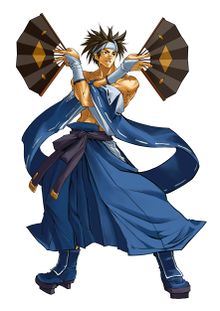 Anji Mito is a fictional character in the Guilty Gear fighting game series, making his first appearance in the second game, Guilty Gear X: By Your Side. He is an escaped Japanese, and because of that is being pursued by the Post-War Administration Bureau. A very curious and friendly man, he is wielder of the legendary Zessen (Stopping) fans, one of the “jinki” of Outrage.