Anno 1404, known as Dawn of Discovery in North America, is a real-time strategy and city-building game. It was developed by Related Designs and Blue Byte and is published by Ubisoft. Anno 1404 is the sequel to Anno 1701 and is the latest instalment in the Anno series.

As with other Anno games, the player, at the will of their unnamed country of origin, creates and manages their fief aside AI players. The player must colonize islands, plan settlements, set up factories and farms to meet their citizens needs, enter diplomatic relationships with AI players, and engage in naval and ground combat with others.

As the player progresses through the game, they gain access to naval vessels and troops which allow them to invade and ultimately to defeat other players. Anno 1404 features an updated interface, bigger islands and worlds to explore, a sandbox mode and other features new to the Anno series.[2] 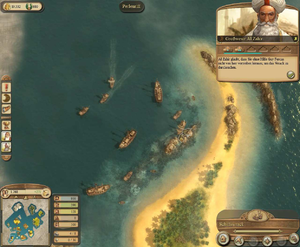 Anno 1404 takes place in the orient

The campaign begins when the player is sent to administer a fief granted to him by the Emperor, in the Occident. The Emperor is unwell and Lord Richard Northburgh, cousin and treasurer of the Emperor, is building a magnificent Cathedral to pray for the Emperor's health. Meanwhile, Cardinal Lucius is making preparations for a Crusade against the Orient, aided by Guy Forcas. In the first few chapters of the campaign, the player learns the basics of gameplay and the economy by assisting Northburgh and Forcas with supply and construction tasks, as well as meeting some of the other main characters.

As the Crusades ships leave the harbor, Northburgh begins to uncover clues to a mysterious crime. He and the player move closer to the Orient, and befriend the Grand Vizier of the Sultan, who helps the player to defeat a band of Corsairs and break up a child trafficking scheme. The plot thickens as further clues are revealed, a main character is implicated in a sinister conspiracy to overthrow the Emperor himself. Northburgh is captured, and the player is left alone. Over the next several chapters, the player must win over new allies, convince the leaders of the Crusade that they are being manipulated for false pretenses, and salvage dire circumstances in order to defeat the villains and restore the Emperor.

A restrictive aspect of the game is its rigorous DRM system based on Tagès. It forces users to activate their game online once by submitting an activation code after each installation on a different computer or a significant hardware change. The activation can be performed on any PC with an internet connection. It can only be activated three times by default and unlike many other DRM systems it does not support revocation of already used licenses.[3] Further licenses can be requested free of charge by contacting Ubisoft.[4]

IGN gave the game an 8.2, saying it was "a worthy successor to the Anno franchise." [6] D Critic praised the game, saying that "with up-to-date graphics, a great soundtrack, and great gameplay, there’s a lot to love about this game." [7]