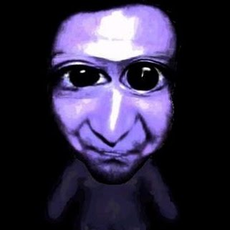 The Oni, who is usually the antagonist of the Oni games

Ao Oni is a Horror Survival game made in RPG Maker developed by Noprops. Every game follows the same formula, locked in a mansion, you explore and solve puzzles while avoiding and hiding from the Oni. A demon the will chase you constantly throughout the game.

Ao Oni received a large following from the US and Korea, spawning hundreds of Oni games that follow their own stories and characters.

Rumors have been going around about a weird monster roaming an abandoned mansion in your town. Your friend, Takeshi, decides to take you and your other friends into the mansion to get to the bottom of it. When entering the mansion you get separated from your friends after going to investigate a mysterious sound.

Later within the game you learn that the monster in the mansion is real and is trying to kill you and your friends, you must escape the mansion before the Oni catches you and kills you.

The game requires you roam the rooms of the mansion collecting items to be used to solve the mansions puzzles in order to advance or collect other items. At random or event times, the Oni or its variants will chase after you, requiring that you out run them or hide from them in the closets scattered around in the game.

The main character of the game and the character you play as. Hiroshi is a high school student who does not believe in things as ghosts and monsters, claiming them to be "Scientifically Impossible"

Since version 5.2 he is the only one who can escape the mansion alive.

One of Hiroshi's friends, she is also a high-schooler and is the only female character in the game. She is believed to be the girlfriend of Takuro, but this is only confirmed in version 1.0.

Mika is the first to die in the game, as you are about to enter the basement a scream is heard from from the room she is in, upon investigation you find the Oni eating her. After this she becomes an Oni, chasing you throughout the mansion.

Takeshi is also a friend of Hiroshi, and the one who brought everyone to the mansion. He is a coward who will jump at the littlest sounds. Most of the time he gets so scared he cant even speak.

After you find Takeshi in the basement, he will blame himself for the death of Mika and everyone else's endangerment since he was the one who brought them to the mansion. Later on you find that he has hunged himself. He becomes an Oni after this event.

Hiroshi's best friend and the last of the three to die. He is the bravest of the group and constantly insists the he an Hiroshi split up to find an exit throughout the game. He breaks he ankle later in the game and is found hiding in a close of the Annex.

After you find an exit, you grab Takuro and plan to escape. But the exit is then destroyed by the Oni who then chases after both of you. Due to Takuro's broken ankle he falls, he screams for help but you go on without him. At the end of the game you are confronted by Takuro, who has somehow survive and joins your party. But after solving the last puzzle he turns out to be another Oni and chases you until you escape.