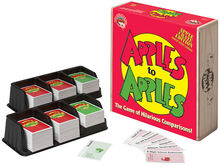 Not oranges to oranges

Apples to Apples is a popular card game created by Out Of The Box Publishing. The game comes with nothing but a large deck of cards, some red, and some green. This is all you need to play the game. The game consists of players matching up red cards to the dealer/judge's green card, who then uses his opinion to decide which card fits best. The winner is the person who wins a certain amount of green cards.

Each player is dealt a hand of red cards, usually 7. Red cards feature a word, usually a noun. They can be specific people, places, objects, and more. There is also a deck of green cards that everyone draws from, that features adjectives.

Next, one of the players will be assigned the "judge" of this round. The job of the judge is to choose a green card from the green deck, and place it on the table for all players to see. The other players then choose a red card from their deck that best fits the one-word description on the green card.

For example, the green card may say "Patriotic." The other players then choose a card from their hand that best fits that word. Some players will have cards that fit very well, like "Statue of Liberty." Others may have some that make no sense, like "Toes". These other players are choosing their card based on what they think the judge will choose. If the judge has a weird sense of humor, perhaps he or she will actually think of "toes" as "patriotic".

The judge does not play a red card. After a round of debating & arguing from the other players, the judge chooses the best card. Whoever owns that card wins the green card, and the judge is changed to the next player. The winner of the entire game is whoever gets the predetermined amount of green cards. This amount is determined by the number of players.

Some red cards feature "My ____". They may be, "My Prom", "My Bank Account", "My Graduation" or more. This refers to the judge's prom, bank account, graduation, etc. Therefore if the green card says "Dirty", and you submit the "My Prom" card, you are effectively trying to say the judge's prom was dirty. Hey, maybe it was, and that will win you the round.