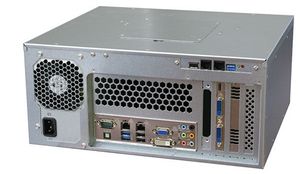 Throughout the late 20th century, arcade video game hardware was most often considerably more powerful than contemporary consoles and home computers of their time, sometimes even an entire generation ahead of home systems. The way arcade systems were built with multiple boards linked together, and upgraded every year with more powerful components, was a precursor to the way PC systems are built and upgraded every year.

The earliest non-microprocessor based arcade system boards were designed around codeless state machine computers with the main board and any support boards consisting of discrete logic circuits comprising each element of the game itself.[2] The next generation of arcade system boards(with the inclusion of microprocessor based technology) incorporated the game program code directly on the main system board via game code stored in ROM chips mounted on the main board. Later arcade system boards, including the DECO Cassette System, SNK's Neo-Geo, Capcom's CPS-2, and Sega's NAOMI, separated the system board from the game program itself, akin to a home video game console and cartridge/CD/DVD/hard disk. This method benefitted both manufacturers and arcade game owners. Once the system board was purchased, the owner could switch out the games at a fraction of the price and with less effort, and the manufacturers could produce fewer of the costly system boards and more of the less-costly games.

Up until the early 2000s, arcade system boards frequently used expensive custom GPU and sound chips significantly more powerful than what was available on home consoles and personal computers at the time. Since the early 2000s, however, arcade system boards have mostly been using commercial graphics and sound cards found in consoles and personal computers in order to reduce production costs.

Currently, the company with the record of the highest number of original arcade system boards is Sega.

The following generational periods mainly refer to the high-end arcade hardware of each era.

The first generation of arcade hardware was based on simple discrete logic circuitry, beginning with the Computer Space hardware by Nutting Associates (employees of which would later form Atari) in 1971.

The graphics during this era was monochrome, and consisted of simple, blocky 2D graphics, up until basic sprites stored in ROM (read-only memory) and vertical scrolling were introduced by Taito's Speed Race in 1974. There were no sound chips during this era, so the sound usually consisted of either simple digital bleeps generated from the discrete circuitry or explosion sounds generated through electro-mechanical methods.

The second generation saw the introduction of microprocessors, beginning with the 8-bit Intel 8080 CPU of Gun Fight, by Taito and Midway, in 1975. After the huge success of 8-bit microprocessor based blockbuster Space Invaders, which marked the beginning of the golden age of arcade video games in 1978, discrete logic hardware eventually faded away.

This era marked a transition from simple, blocky, monochrome 2D graphics, to multi-coloured, 2D hardware sprites, and multi-directional scrolling backdrops, by 1980. Some pseudo-3D techniques were also introduced, in the forms of vector graphics and sprite-scaling, by 1981. Sound boards and sound chips also began to be used during this era, leading to the introduction of chiptune music in the late 70's.

This era saw a transition from 2D sprites and vector graphics, to advanced pseudo-3D sprite-scaling, which, following the introduction of Sega's Super Scaler technology in 1985, was able to scale thousands of sprites per second, and functioned similarly to, and was a precursor to, texture-mapped 3D polygons. There were also failed attempts at primitive 3D polygons, such as Atari's I, Robot in 1984 and Taito's Midnight Landing in 1986. Sound chips capable of FM synthesis and PCM sampling were also introduced during this era, along with audio playback from the Laserdisc format, by 1984.

This era marked the transition from 2D sprites and pseudo-3D sprite-scaling to true polygonal 3D graphics, powered by GPU chips and graphics boards dedicated to 3D graphics, as early as 1988. The first dedicated polygonal 3D game systems were the Taito Air System and Namco System 21 in 1988. However, 3D polygons would not become dominant up until the arrival of the Sega Model 1 in 1992. Sound chips also became more sophisticated, with more advanced FM synthesis, dozens of PCM channels, MIDI support, and playback of compressed audio files, by the early 90's.

This era marked the transition from simple, flat-shaded, 3D polygons, to texture-mapped 3D polygons with effects such as Gouroud shading, texture filtering, anti-aliasing, and T&L, as early as 1993.

In the sixth generation, 128-bit microprocessors began to be used, beginning with the Sega Naomi hardware, the more powerful arcade counterpart of the Dreamcast console, in 1998; both the Naomi and Dreamcast used the 128-bit Hitachi SH-4 CPU and PowerVR 2 GPU processors.

This era saw the introduction of more advanced 3D features, such as hardware Phong shading introduced by the Sega Hikaru system in 1999, and bloom lighting, depth-of-field effects and programmable shaders introduced in the early 2000s.

In the early 2000s, as powerful graphics boards previously limited to arcade systems became commercially available for PC systems, the PC platform eventually overtook arcade systems as the platform of choice for the most powerful graphics cards. As a result, the Sega Naomi 2 system, released in 2000, was the last major proprietary arcade hardware, not based on PC or consoles.

As a result of the PC platform surpassing arcade machines in terms of power in the early 2000s, arcade systems eventually transitioned away from expensive proprietary hardware towards being based on more affordable commercial PC hardware.

In 2003, the seventh generation of arcade hardware began with the Namco System N2, based on PC architecture, using a 256-bit nVidia GPU. While most CPU processors continue to be either 64-bit or 128-bit, most GPU processors are now either 256-bit or 384-bit.

This is a list of notable arcade systems and their specifications, demonstrating the evolution of arcade video game hardware.