Arcanine (ウインディ, Uindi?, Windie in original Japanese language versions) is one of 493 fictional species of Pokémon in the Pokémon franchise. Because Arcanine is considered a legendary beast (albeit with a small "l") and is based upon the Chinese fu dog, its name is most likely a portmanteau of the words "arcane" (in the sense of "mystical") and "canine." In the beta English translation, Arcanine was originally going to be called Blaze.

Arcanine is a canine pokémon that resembles the shisa but is orange, with black zig-zagging stripes and muscular chest resembling a tiger, also including large, bushy hair and a mane similar to that of a lion.

In the Pokémon world, Arcanine is one of the most admirable Pokémon. Many things contribute to this favorable impression: despite its imposing size, Arcanine is very agile and graceful. It can run as much as 6,200 miles (almost 10,000 kilometres) within 24 hours, all the while looking almost as if it is flying. As is the case with most Fire-type Pokémon, the fire burning within its body gives it strength. Its mane is said to be an object of exquisite beauty, and even its bark is described as "majestic" and "awe-inspiring".

Arcanine has been revered in this way from the ancient times and particularly in China, whose real-life ancient culture features divine entities resembling Arcanine in some respects. An ancient picture scroll reveals that Arcanine's passage through prairies attracted people to its movement.

Arcanine's species is classified as "Legendary" in the Pokédex, although the word is probably used in an entirely different context than with the actual Legendary Pokémon. It is theorized, however, that Arcanine was one of the original three Legendary Pokémon, the other two being Zapdos and Articuno. It is thought the game designers decided to make all three legendary pokémon "birds" and so they replaced Arcanine's status as the legendary fire Pokémon with Moltres. They did, however, give it the label of "Legendary Pokémon" (albeit with a lowercase L). Arcanine's sum of base stats are the highest below 580, which is the bench mark for Legendary Pokémon like Articuno, Zapdos, and Moltres.

Arcanine's stats are all very well rounded. They have a total of 555, which rivals the stat totals of Legendary Pokémon. (Mew and Celebi for example have a stat total of 600, while Articuno and Entei have a total of 580). Arcanine can also learn many powerful attacks from when it is a Growlithe, as well as from Technical Machines. Growlithe and Arcanine gained more popularity in the Advanced Generation of Pokémon games, as Growlithe was able to learn the useful Helping Hand move.

But despite its wide movepool and high stats, Arcanine is a very difficult Pokémon to strategize with due to the incompatibility between its stats and moves. Arcanine's highest offensive stat is its attack but it does not possess many impressive physical attacks. Because it is a fire type Pokémon it naturally gains STAB (Same Type Attack Bonus) from fire attacks, but fire attacks, prior to the 4th generation of Pokémon games, have been reliant on the Special Attack stat, rendering them useless on Arcanine. However, with the Physical/Special split in Pokémon Diamond and Pearl, Arcanine can use Fire moves based on the Physical stat, such as Flare Blitz, as well as many other attacks which would have been considered special before Diamond and Pearl due to their typing, such as Thunder Fang, greatly enhancing Arcanine's usability.

In Pokémon Snap, Arcanine may jump out of the three erupting volcanoes at the end of the Volcano level, if a Pester Ball is thrown inside accurately enough.

Arcanine is one of Gary Oak's Pokémon. They are also used by the police force, along with Growlithe.

In Episode 76 (Fire and Ice), Ash battled an Arcanine in the Pokémon League. After Ash's Kingler defeated his opponent's Cloyster, the opponent switched to Arcanine. Arcanine defeated Kingler with its Dragon Rage, but after Arcanine made the Ice Field melt with its Fire Blast, Pikachu was able to defeat the Arcanine. Also during one Indigo League episode, an Officer Jenny mistakenly calls her Growlithe as an Arcanine.

In "On Cloud Arcanine" while going to the Battle Arena in Saffron City where Team Rocket works. While in a long line, they see an Arcanine and Drew trying to catch it with his Flygon. At the end it turns out our Arcanine was taking care of its babies.

Dome Ace Tucker has one in the anime. In episode 2 (Pokémon Emergency) of the first season, Arcanine is briefly depicted on a plaque/ancient-tablet in the Pokémon Center along with Ho-Oh, Zapdos, and Articuno. There is much debate and confusion as to just what these four pokémon have in common, if anything. It has, however, been suggested that the four pokémon were actually Arcanine, Zapdos, Articuno and Moltres (which Ash, Professor Oak and probably many other people mistook for Ho-Oh since it was just a rough image), in which case the plaque depicts the original four legendary pokémon.

In Pokémon Special, Blaine is seen to have an Arcanine from a flashback in Volume 3, when he recalls a confrontation with Team Rocket.

Crystal has an Arcanine, whom she uses for transport at times. It is able to hit targets fast and hard using its ExtremeSpeed. As explained in a flashback in Volume 11, Arcanine was a wild Pokémon from Mt. Mortar whose left eye was injured five years ago. The cause is revealed to be a Larvitar prankster, whom Crystal manages to capture. 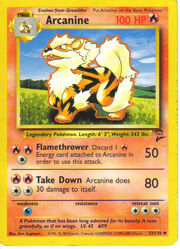 Arcanine's appearances in the card game include:

It also has a promo card.