Arkham is a selfmade cambion obsessed with obtaining the power of sparda and ruling both worlds.

As Arkham , he is a subtle looking bald man with a yet serious expression, He has a demonic tattoo o 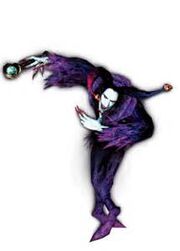 n the left side of his head which pulsates. He and his daughter are both heterochronogetic. He has a pseudo appearance of a preacher which is ironic to his demonic personality.

As Jester he has pale white skin , an abnormally large nose , long red finger nails and is once again heterochronogetic and has the outfit of a medieval clown as the name suggests.

His assigned colour is purple.

Arkham has displayed an array of contrast personalities - he was compassionate to Lady , mischevious to Dante (as Jester) and stern to Vergil.

His real personality is of being stern and he is maniacal is his quest for domination.

Appearance in other media[edit | edit source]

The Devil May Cry Manga