Armagetron Advanced is a multiplayer game in 3D that attempts to emulate and expand on the light cycle sequence from the movie Tron.[1] 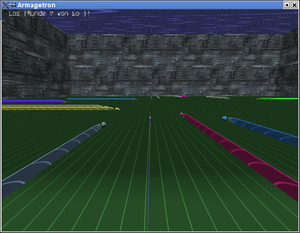 Two or more players are represented by dual-wheeled motor vehicles, or light cycles, in a grid-lined arena. The vehicles constantly move forward, leaving a coloured trail behind them as they travel. Contact with either the arena walls or a trail left by a player will result in death and elimination from the battle. Therefore, players attempt to "box" each other in order to force their opponents to touch their trail or one of the arena walls. Players can change the direction of movement, by turning 90 degrees to the left or right (though in some servers the axes is more than four, making it possible to turn in 45 degrees, 180 degress, or none at all).

The closer a player is to a coloured trail, the faster his or her cycle will move. This allows players to accelerate and use the resulting speed advantage to outmaneuver their opponents. Players are able to use a brake - the 'v' key by default - to slow down, however the effectiveness of the brake varies from server to server. Some servers even implement a 'speed brake', which turns the brake key into an accelerator.

Armagetron Advanced allows for a high level of configuration, however these settings are most common:

In the command console, you can reach the advanced level of configuration in singleplayer games. Popular commands include editing the length of cycle walls, brakes, color, and acceleration; arena size and speed can also be accessed from the preferences menu. For a list of commands, go to their website. Some commands are more tricky to find, encouraging experimentation for the curious mind.

The most important setting currently in most Armagetron Adavnced servers is rubber. Rubber in this game is the setting telling the player how much more they can hit the wall and still be alive. In older days, rubber was used to deal with lag, which is a crucial problem in all online games. Now rubber is used to play different game modes such as Sumo, Capture The Flag, and High Rubber. Generally, in most servers, rubber recovers over time.

Armagetron Advanced has a large and lively online community. There are numerous servers[2] available, some only to those with particular versions of the Armagetronad client. Online gameplay offers people from around the world to play and talk. Often players will also have applications which allow them to talk to other players by voice, which is helpful if they are on a team.

A Large Ambitious 1,048,576 player tournament in the game style Fortress, named the TRONIC Cup, is scheduled to occur in a future.

Because of the growing community and the increasing popularity of fortress and the outstanding changeability of server settings and styles, a number of self-organized tournaments came into being, such as the so-called Ladle or the highly acknowledged Team Sumo Tournament. Furthermore, there is the Fortress Premier League which has been started in Fall 2009. The bigger part of teams which participate is based on clans; although there are also 'open' teams whose players are not part of the clan system.