Articuno is a powerful legendary Pokémon, first appearing in in Pokémon Red and Blue. It is a Legendary Bird. The name "Articuno" comes from the word arctic and uno, meaning "one". Articuno is one of the more well-known Pokémon, due to being one of Red/Blue's five legendaries.

Articuno is the avian embodiment of freezing cold. It appears to be a large bird with blue plumage, white talons, a bluish-white-feathered chest, a three feathered crest adorning its head, and an elegant, sparkling beautiful long tail. The crest and tail are slightly darker in colour compared to its body and its beak and legs are almost lilac-blue. Its eyes are red.

Articuno can create and manipulate ice freely. Its translucent wings are imbued with the essence of frigidity, and the flapping of its wings chills the air, causing the conversion of water particles in the air into snow or ice. Therefore, it is believed that when this Pokémon flies overhead, snow will fall. To be able to freeze water with heat producing movement proves that Articuno is one of the coldest Pokémon in existence and appears to be able to control its body temperature as it does not freeze the air while idle. It is believed by many that Articuno resides within the confines of icy mountains, because those who have seen it were often doomed explorers scaling such mountains, and therefore it is believed Articuno makes it a point to appear before them and save them, since it is not a malevolent creature.

Articuno may have been somewhat based on the real-life Resplendent Quetzal with a similar long tail and crest, and also the Anka, a mythical bird similar to the Phoenix that has powers associated with ice. This Pokémon's appearance is based on the Arabic Anka myth, which is that of a giant Arctic bird. The bird is similar to the phoenix as it is known to resurrect itself and appear to doomed people in the mountains. According to the Pokédex, Articuno only appears to those lost in the mountains, doomed. As it flies, it freezes the water in the air around it, making snow. Its wings are somewhat transparent and made of pure ice.

Articuno can be found in the Seafoam Islands caves, waiting for you on a rock. In order to Surf to it, you'll have to solve the caves' boulder puzzles and block off the current. Bring plenty of Ultra Balls.

Trade from Pokémon FireRed and LeafGreen.

After you complete the game,See Professor Oak in Eternia City, then find it as one of the legendary 3 birds flying around the map OR via Pal Park

Articuno can be snagged from Greevil during the game's last battle. When purified, it will know Haze, Extrasensory and Heal Bell, all moves that Articuno can't actually learn or know normally.

In the caves, an Articuno will hatch out of the egg surrounded by Jynx if you play the Pokéflute while approaching it.

Articuno is notable for having pretty good Defense and high Sp. Defense, but notably low attack stats and low Speed (for a Legendary, at least). Throw that in with 4x weakness to Rock and weak to Fire, Steel and Electric—all popular types with powerful moves—and you might want to consider Baton Passing a few stat-ups or pseudo-passing a Reflect to it before bringing it out. Either way, Reflect or Substitute on Articuno are both good ideas.

That being said, STAB moves on Articuno are a must-have to make up for her lower attack stats. For Ice, Ice Beam or Blizzard both work—choose one depending on whether you prefer accuracy or power. Articuno's Attack is even lower than its Sp. Attack, but if you want a Flying move, Aerial Ace and Hidden Power Flying are your only real choices.

And finally, a move to thwart those Rock-types that might show up to spoil your fun. Rain Dance with Water Pulse is one option, but it might not be a good idea, since Articuno is weak to the powerful Thunder, which becomes 100% accurate during Rain Dance. After Water Pulse, Steel Wing might be your next best bet, but that'll only be 2x the damage instead of Water Pulse's 4x damage when against the common Rock/Ground Pokémon.

Your 100% best bet with Articuno and its high speed and defenses is as a ResTalker, with Rest/Sleep Talk/Ice Beam/filler. Roar is nice as the filler move when you have Spikes out.

Articuno first appeared in Pokémon: The Movie 2000 together with the other two winged mirages. Lawrence III created a battle between them, and Ash Ketchum had to team up with Lugia to stop this madness. He was the only one not captured.

Articuno also is a wild befriended Pokémon used by the Battle Frontier Brain at the Battle Factory named Noland. This Articuno was befriended and sometimes is used in playtimes and battles, such as his battle against Ash and his Charizard but unfortunately it's playtime for Max and Pikachu as they ride along with Articuno in Noland's plane. They knew that Articuno is a Legendary Pokémon. Still, they accepted the challenge. In the ending of "The Symbol Life", a seismic toss from Ash's Charizard causes a large cloud of dust. When the dust clears, Charizard appears to be defeated. However, Articuno falls over and Charizard is able to get back up. Ash is then declared the winner. Both congratulate their Pokémon Charizard and Articuno for their effort. Noland says goodbye to Articuno as it flies off into the sunset. Later, Ash says goodbye as Charizard leaves as well. With the Knowledge Symbol won, Ash and friends move on to the next area.

It is unclear whether all of these appearances are by a single, unique Articuno (as in the games, animes and in the movies where each Legendary Pokémon is one of a kind), or if those in the TV series are offspring, relatives or descendants of "the" Articuno of legend, depicted in the second movie. It may just be that Articuno as a species whether it is a hero, anti-hero or a villain, along with Zapdos and Moltres, are so rare and isolated that they are considered legendary. It is suggested in the episode "Freeze Frame" by Nurse Joy that many other Articuno apart from the one seen in this episode probably have nests in other cold locations with high altitudes. Articuno does appear significantly larger in the movie, but depictions of Pokémon size are sometimes inconsistent (for example, Ash's Charizard can appear twice as tall as Ash one episode, and be nearly eye level the next, which is exactly the same height as Articuno.)

In Pokémon Adventures in Chapter 25, Articuno appeared as a winged mirage of ice to the hero, Red. Red and his Pokémon teammates went in search for this winged mirage, Articuno. Gyarados was now a new member of Red's Pokémon (original trainer: Misty), but was stopped by the evil hands of Team Rocket, Red and his Pokémon partners had to defeat Team Rocket and manage to save this legendary Articuno in a fight before they plan to steal her from him, their plan backfired as Gyarados accidentally broke the ice, causing Articuno to break free in the iceberg to save both Red and Gyarados from Team Rocket's Muk finishing them, but it was frozen by its ice beam attack. In the end, Red and his teammates thought they had failed to save the legendary Articuno and become their new partner. (in this comic, Gyarados falls in love with the legendary Pokémon, Articuno).

In Chapter 26, Articuno as a legendary had turned to dark side in the hands of Team Rocket's three henchmen, Koga the Ninja, as well as the other two winged mirages: Zapdos for LT. Surge (perfect match for his electric Pokémon) and Moltres for Sabrina (immortal soul and mind of inferno) to challenge Red, Blue and Green. In the end, the trio successfully defeated the combined three evil winged mirages. The three winged mirages are finally freed from the evil hands of Team Rocket, Red (main protagonist) takes his last look at the beautiful winged mirage, he learnt about the beauty of this legendary Articuno as it flies off. It turned out to be a female-like legendary Pokémon.

In Chapter 179, Articuno appears again to be Green's Pokémon protagonist as well as the other two, as the trio of winged mirages and their human mistress, Articuno once again help Red and his partners to save the day from destruction of Ho-Oh and Lugia's attack, as he rides on her back as they flew off, Green face off against Pryce's two of his best henchmen, Will and Karen (Elite Four leaders) as well as new two legendary giant-sized Pokémon, Lugia and Ho-Oh, the evil duo try to defeat them, but failed as many Pokémon came to rescue as they attacked both legendary Pokémon so that they could release from the evil control,. In the end, Green summons back her three Legendary Pokémon as Red gave her back her Pokémon, Blastoise and his friend/rival Blue for Charizard.

In Chapter 180, Articuno makes a cameo appearance (cut comic scene) in the ending chapter, like Green's winged mirages traded her Pokémon data to Crystal as she does the same, like Red's Articuno for Crystal's Suicune, Green's Moltres for Silver's Entei and Blue's Zapdos for Gold's Raikou (not really trading in the trading centre). Although Articuno was also appears as a guest appearance along with the other two winged mirages, she could make another appearance in Ruby & Sapphire.

In Magical Pokémon Journey, a female Articuno is also featured as a friendly legendary Pokémon like the original character in the other game version, it appears as a female challenger as she wears an apron to challenge Pikachu, Jigglypuff and Clefairy in her challenge by eating 50 snowcones, but loses the contest, so she doesn't grant them any wish to free Hazel, Almond and Squirtle. Although Articuno changes her mind and decides to free them instead, at the end of this comic, she takes them all home by having them sit on her back safely and puts them off as she flies away to say "goodbye". 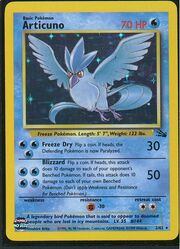 Articuno, as seen in the Pokémon Trading Card Game

In the Pokémon Trading Card Game, there are four mainstream versions of Articuno:

In addition, there were two promotional Articuno cards in the game's history. One was handed out alongside Zapdos and Moltres promo cards at showings of Pokémon: The Movie 2000.