Artificial Girl 3 (人工少女3 in Japanese) is a 2007 adult dating video game by Illusion, for Microsoft Windows. It is the third game in the Artificial Girl Series, and was released exclusively in Japan. The game comes in 2 DVDs and is about 6GB. As of August 24, 2007 Artificial Girl 3 has gone gold.

In the main tab the player is able to choose what type of clothing the character wears at a specific time of day. The first button at the bottom of the menu in the left hand corner lets you create characters, the second button to the right lets you create clothing. Characters and clothes that are created will be displayed on the list of Characters and the List of clothing. Below the list there are 8 text boxes where the player can add clothing for the female to wear during the day, an alternative day clothing, a night clothing, a sleep attire, a bath attire, a cute attire, an sexy attire, and an erotic attire. The time the player wears which clothing is determined by the gameplay. If the player chooses not to add in clothes, her character will appear nude by default in gameplay. In the make mode the player has a tab in which he can create female characters and customize some of their physical attributes and their personalities and voice. The save button is on the first tab below the text box on the right. The buttons below it are to control the camera. To return to the main menu click on the large button on the left corner. There are also eight pre-made figures for the game. The second tab allows the player to modify skin tones, pubic hair color and density, and sun tans. The third tab allows that player to adjust breast characteristic, waist size, nipple and areola characteristics. The fourth tab allow adjustment of eye shape & size and pupil size and color. The fifth tab allows adjustment of eye make-up, mole, and eye lashes. The sixth tab allows modification of eyebrow colors, shapes and nose adjustments. The seventh tab modifies the mouth, jaw, chin, modifications, and lip color. The eighth tab controls the hair style and colors. The ninth tab controls the females voice, personality, birth date, and name. The last tab controls the female characters AI characteristics. 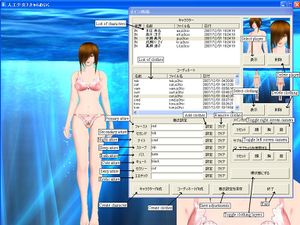 There is another tab for customizing clothing and under garments. The player can change clothing textures by choosing from the .tga and .bmp files in the spaces above the bar that allows the player to choose colors. Below the colors is four option buttons in which the player can change the clothing material's gloss and reflection. The keys in creating clothing is similar to the ones for creating the female character. The first tab allows the player to modify under garments. The second tab modifies clothing, sleeves, and bottom attire. Third tab modifies gloves, socks, and shoes. The fourth tab modifies head gear and head attire. The last tab modifies bows, backpacks, tails, and neck attire.

There is a bar on the lower left hand corner which tells where the females are and their relations to the player. The counter tells the room the female character is in and the mood status. The default color is blue but the counter can change to green, yellow and red. Blue indicates that the female shows no interest in the player. For new characters with a blue display the player is able to only hug and eventually kiss her. But for characters who were green and turned blue the player is able to have sex with her while standing. A green display allows the player to kiss the female longer and have sex with her easier. The green display also causes the female not to run out of the room when shocked as easily. The red icon indicates that the girl loves the player and the player can enter the sex mode easily. The female will also dress in cute, erotic, and sexy outfits. She also will not be shocked if the player enters the bathroom while she is bathing. In this state, girls with any type of personality trait will enter into a specific sex-mode. The counter can change if the player Hugging & Kissing the female, Eating with her, Hold her hand and enter different locations, sleeping in the same bed, providing sexual satisfaction to her, and sitting with her relaxed (left click after sitting and the male's head will lean back, works on specific static items. It is done correctly if she puts her hand on the player) The yellow color indicates that the girl is jealous of the players relationship with another female character.