Astriarch: Ruler of the Stars 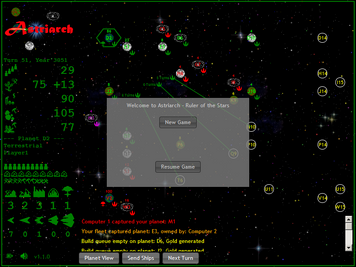 Astriarch: Ruler of the Stars is a Turn-based, Single Player Space Strategy Game. Build planetary improvements and star ships to capture planets and defeat your enemies. Your ultimate goal is to become the master of the known universe, and earn the title of Astriarch!

Developed in 2010 by Mastered Software, Astriarch combines many aspects of other classic space strategy games such as Master of Orion 2 (MOO2), Stellar Conflict (1987 Amiga), and Star Control.

Currently Astriarch is released as a free casual web game implemented in HTML5. This version can be played at astriarch.com. Planned future enhancements include multiplayer mode, research tree, and tablet/desktop versions.

The name Astriarch comes from the Ancient Greek words for star (ástron) and ruler (arkhos).