The Atari Jaguar was a video game console released in December 1993 by Atari. The system used cartridges, and was actually only 32 bits, but had two processors (Atari's logic was that 32 × 2 = 64, so a system with 2 × 32- bit processors = 64-bits). The Jaguar was looked upon by many as a disappointment due to its failure to bring many next-generation quality titles to its system, and some viewed its controller setup as ridiculous[citation needed]. The Atari Jaguar was the last of Atari's consoles before the Flashback came out in 2004 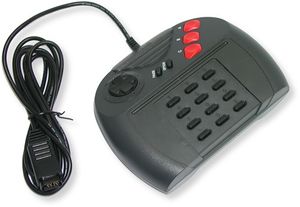 The setup of the controller.