Australia is a country in the geopolitical region of Oceania. Its capital is Melbourne, and it is neighbored by New Zealand. Australia previously used the Office of Film and Literature Classification (often abbreviated OFLCA to differentiate it from its New Zealand counterpart with the same name) for rating its video games, but that organization has now been superseded by the Australian Classification Board. 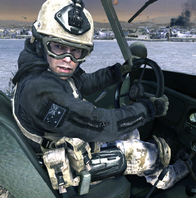 Rook from MW2, Driving Captain Price in a Jeep.

Australia and Australians feature prominently in video games, mostly since 2000.

Due to the sensitive nature of geopolitics and an anti-war culture in Australia since the Vietnam War, Australia does not feature as either an antagonist or protagonist in most video games centered on warfare as a theme.

However, Australians are represented, and have been so at least since Call of Duty: Modern Warfare 2. The Australian SASR is also available as a Special Forces class in Medal of Honor: Warfighter.