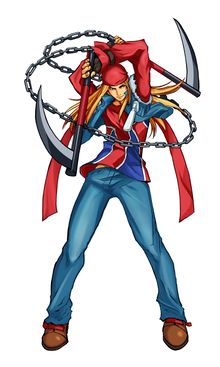 Axl Low is a character in the Guilty Gear fighting game series, making his first appearance in the first game, Guilty Gear: The Missing Link, though his story and character change and develop further in the later games. He employs a strangely modified kusarigama, which, instead of a weight at the end, has another kama, and a thus-far unexplained control over fire. His personality can be described as laid-back or lighthearted, and despite his consistent failure to solve his problem, he always keeps a fairly upbeat attitude.