Azumarill (マリルリ, Mariruri, Marilli in original Japanese language versions) is the evolved form of Marill, a Pokémon from the Johto Region. Although it is a rabbit, it has a long tail.

Its name comes from azure or azul, the color blue in Spanish, and Marill, its pre-evolved form, whose name is derived from marine and rill. It could also be a combination of the names of the Pokémon Azurill and Marill, its preevolved forms, though as Azurill was revealed years after Azumarill appeared, this is unlikely. Azumarill's Japanese name, Mariruri, comes from a combination of Mariru (Marill's Japanese name) and the Japanese word ruri, meaning "Lapis lazuli."

Azumarill resembles a blue, bipedal rabbit with a large, ellipsoid body, long blue ears with red insides, and a blue ball on the end of its thin, elastic black tail. The white bubble-like pattern on its lower stomach helps it to camouflage itself from potential predators when it is in the water, much like how Magmar’s fiery appearance helps camouflage itself in volcanic environments.

There have been reports of acts of nobility and kindness from Azumarill individuals in the wild. Azumarill can make thick, liquid balloons out of thin air and the saliva-water stored in its body. If it spots a drowning Pokémon in any body of water, it fashions such air balloons and jumps in to give the troubled Pokémon air balloons to help it breathe.

Azumarill lives in water virtually all day long, so its body bubble patterns as camouflage are practically invaluable to its survival. Azumarill's long ears act as sensors which are vital to its survival as well. By keeping still, focusing its hearing, and listening intently, this Pokémon can identify what kinds of prey are around, even in rough and fast running rivers. Otherwise, when alone, Azumarill plays in water as a natural pastime, though it must roll up its elongated ears to prevent the sensitive sensory materials inside them from getting wet. The ball at the end of its tail can act as a sensor and guide it while under water.

Azumarill does not appear in any region of any game as a wild Pokémon, so it cannot be caught in the traditional sense. As the stage-1 evolution to Marill, it is obtained by being evolved from any Marill caught in any game and raise up to Level 18.

Azumarill was considered worthless in the second generation when it was introduced because of low Attack and abysmal Special Attack, making it unable to utilize Water type moves efficiently. In the third generation, abilities were introduced. Azumarill gained Huge Power, which doubles its attack. However, Water type moves were considered Special, so Azumarill could not use STAB moves efficiently.

In the fourth generation, Azumarill finally could live up to its potential, with the Attack and Special Attack split. Moves were no longer classified by type, but rather by contact, such as Thunder Punch being physical while Surf was special. Azumarill can learn the physical water move Aqua Tail, as well as Waterfall through HM. It can also learn Aqua Ring naturally, which restores HP every turn.

In the Anime, the first appearance of an Azumarill was a female that Ash's Totodile instantly fell in love with but did not want his affection. She happened to be a circus star who caught the attention of Team Rocket who kidnapped her along with Pikachu and later Totodile when he tried to save them. Some think they would have been a good couple, if Azumarill hadn't already been in love with a Golduck owned by her trainer.

The next was a mother (Japanese version was aunt) to an Azurill in the Pichu Brother epic.

Another Azumarill had a nasty attitude with its Meganium partner that harassed Squirtle and Bulbasaur and lost to Pikachu in the Silver Conference.

A wild one alongside a Marill and an Azurill attacked May's Torchic as payback for scorching it with its Ember attack and scared off by Pikachu.

In the short Pichu Bros. in Party Panic on Pokémon Channel an Azumarill was in charge of delivering the invitations to Meowth's party.

An Azumarill in Millennium City enjoys making flower necklaces, but will unleash its Water Gun when angered.

An Azumarill was recently captured by Paul and was used in his Gym Battle with Roark's Geodude. Even though having a powerful Hydro Pump, it lost against Roark's Geodude and Paul gave Azumarill to a passing Trainer.

In the Pokémon Special manga, Azumarill debuts in Volume 11, being chased by Crystal's mother. When her mother asks her to demonstrate her capturing prowess, Crystal fails (as she has done so since her failure to capture Suicune), eliciting her mother's concern over her sudden loss of her ability.

Matt uses an Azumarill in Volume 17 in an attempt to drown both Sapphire and Flannery in the Cable Car of Mt. Chimney. 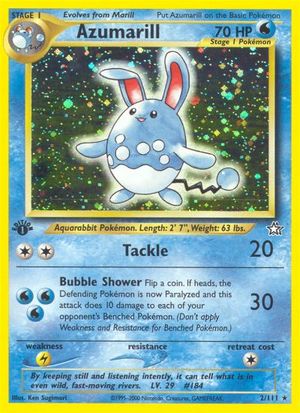 Azumarill has made the following stage-1 Water-type appearances: