From Codex Gamicus
< BC Kings
Jump to: navigation, search 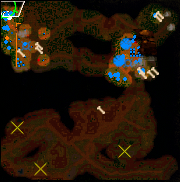 In this mission, you have four objectives:

There are two shell coins in this map. They may be found:

Your initial forces are relatively strong, but will only barely handle the mutants scattered throughout the area. You should first attempt to head to the north-east corner and meet with Giesnik. Once you contact him, he will instruct you to collect resources to repair the bridge, and also provide you with additional troops. He provides a side quest to locate the three explorers. They may be found at the end of the south-east path from the bridge, at the north-west corner below the river, and at the southern part of the map, where the path turns to the west (each marked with yellow 'X' on the above map)

Send all your units to the west to reach treasure island. From here, you will learn the basics of collecting resources: building a lumber camp, and assigning workers to collect the resources as necessary. The best place to collet resources is in the center of the map - here, there are a few piles of stone and many trees. When you have enough resources, build a carrier and send them to the wasteland. There's no rush; you can take as much time as you want to collect resources, or to find other items on the map.

Once the carriers are built, your units are returned to the main area. Head to the bridge, then go north - this starts the mission timer.

You now need to build your base - Start by building the camp (the main economic hub), and the harvest camp next to some wood, as well as a few houses to train additional workers. There are two sets of berry bushes in that region, which you should start collecting from. There is also the stone and bone mines nearby.

Build a barracks, and make sure you get 10 units. Place this small group near the bridge to the west to prevent incoming attacks. Next, train a group consisting of three rows of units, a mixture of warriors and stone throwers. Send these units to the bridge north and west of the camp (although you may want to clear out wild animals first.)

When you spot the enemy camp, you will receive an objective to destroy it. Instead of charging the gate, send the large group through the forest north of the path, and send them west. Attack any workers cutting trees there, then break down the northern wall. Once you breach the defense, you can charge the barracks or clear out the enemy camp.

Once the enemy is defeated, head to the north-west to win the mission. 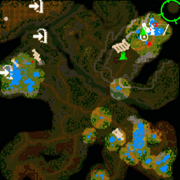 Build your base and start collecting resources. To stop an incoming attack, you should prepare at least 20 units, a mix of warriors and stone throwers, and have them wait around the north-west area of the camp (which is the only access to your base. There will be a heavy consumption of both wood and food as you build your army, thus place focus on collecting those two resources.

From the starting area, there are two groups of berry bushes, one further north from the camp. Stone and bone mines are to the north west, and wood to the south-east. Upgrade your base if possible: Build a bonesmith, collect about 1000 of each resource, then upgrade to a keep. This will allow you to build guard towers to delay enemies, as well as improve your units.

You should train about 60-80 military units before making an attack on the Boneheads. There are two entrances to the base, both on the east and guarded by upgraded guard towers. Charge and destroy all production buildings, and claim any workers. Once cleared, head to the Swamp and save the game (or use the secret passage north of the Bonehead camp to head to the optional objective)

In the Swamp, build a keep near the starting area, and use it to collect resources or reinforce your troops (as well as to research available technologies that aren't otherwise available at the main camp). However, if you have at least 60 troops, they should be enough even if they are slightly injured. Your first encounter with enemies will be after the second bridge. Get them across, then clear out the three corners of the map; there should be two eggs in each corner that you need to grab.

Once you have the eggs, build a dino nest and workshop. Create a catapult, and use it to destroy the rock barrier behind the bridge.

The final objective is to destroy the mutant camp. As always, it will not pose a threat with 80 troops; when all production buildings are destroyed, their units and towers will self-destruct.

If you want to complete the optional objective, send a force through the secret area north of the bonehead camp; only 20 units are necessary. On the other side, speak with the gardener on the west, then clear out all dinosaurs that are places within the island. Your reward is two shell coins.

Complete the level by sending your heroes to the marked corner.