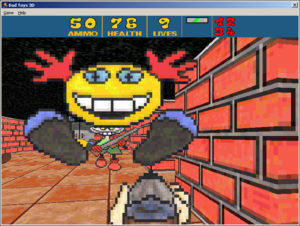 Bad Toys 3D is a first-person shooter game for PCs running Windows 3.1 and above, released by Tibo Software in 1998.

The company Happy Toys, after experiencing a stock plunge, is bought by Delta Military Systems and so becomes Delta Toys. Then on Christmas Day, a security guard of Delta Toys was charged with shooting his own daughter, which he claims was actually done by a toy. DMS loses contact with Delta Toys shortly after, and a SWAT team is sent in. However, soon all are reported as Missing in Action. In desperation, the Defence Council sends in the best man they have to find out what is going on and eliminate the threat.

There are twenty-five levels of play, of which three are included in the shareware version. The player explores rooms and opens doors with their mouse, keyboard or joystick, choosing weapons, collecting ammunition and shooting armed toys as they go. The game is also very found of monster traps, which will often spring up when a player returns to a previously neutralized area or while the player's back is turned. The player has three lives to start with and games can be loaded and saved in progress. The game can be made into stereo sound and much larger formats on modern computers. The game does not feature overt graphic violence, featuring stars instead of blood, but it does contain a cartoon nude poster texture - making its target audience questionable. Generally, it has been taken as an absurdest or even parodic game; audio is used sparsely, and ambient noises help build up a tense atmosphere.

There are times when you have so many bad toys against you, you are not going to beat them and speed can work in this case, just ignoring them and getting beyond their range. You are often given a second or two before a toy attacks and blasting away at even the big monsters with a pistol can beat them. Press button "M" on your keyboard and a map of the area you have covered on that level comes up showing where you are (and if previously found) where doors are which fit the keys (they match the colour of the key that opens them). The toys normally warn you of an attack by a sound they make. You can quickly enter a door and instantly withdraw, so being warned if there is something on the other side. One annoying point about the game is that toys can almost shoot around corners. However this works in your favour as well in that as soon as you see the edge of a toy, start blasting away. 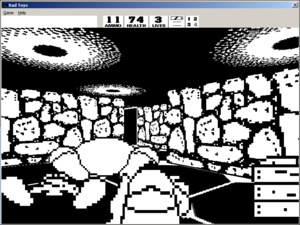 The game was made by Czech brothers Pavel and Libor Valach and was first issued in black and white as simply Bad Toys in 1995, and spread mostly through shareware compilation disks. The original title featured only sixteen levels, with a one level shareware release. It is particularly notable as a first-person shooter made for Windows in a time when DOS still reigned supreme as a gaming platform. In 1998 the new colourized and enhanced version was released. Since then, Tibo Software has also created the Jigs@w Puzzle and Rolling Marbles games. Due to the game's non-English authors, the translations are a bit clunky.