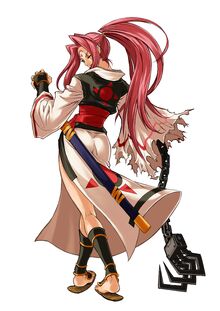 Baiken is a character in the Guilty Gear fighting game series, making her first appearance in the first game, Guilty Gear: The Missing Link as a secret boss. She wields a katana as well as several hidden weapons, ranging from blades on chains to a cannon, all of which are concealed within her right sleeve, since her right arm is missing. Her personality can be described as vengeful and cold.