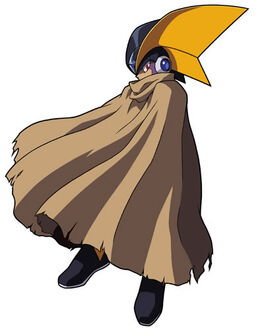 Bass as he appears in Mega Man Battle Network for the GBA.

If you're looking for the Dead or Alive series character, please continue to Bass Armstrong

Bass (Forte to the purists and the Japanese) is a character from the Mega Man series, specifically the classic games (Mega Man (NES) through Mega Man 8). He was similar to Mega Man in design, but with black armor, and a strange bat-like helmet. In games such as Mega Man & Bass, Bass had the advantage of shooting diagonally and being able to dash, but could not charge or move while shooting. In the classic Mega Man timeline, Bass is Mega Man's rival.

In the Mega Man Battle Network series, Bass remains largely hidden in the first couple of games, as a secret, rare, and legendary boss, much in the same way Mew is touted as a legendary and rare Pokémon. Eventually, Bass takes a more prominent role in the series, and is less of a secret.