Baten Kaitos: Eternal Wings and the Lost Ocean is an original Role playing game from the minds of the creators of the Xenosaga universe and Masato Kato, the script writer for Chrono Trigger and Chrono Cross, among others. It is a GameCube exclusive with a unique, Poker-like, card-based battling system.

Baten Kaitos is Arabic for "In the Belly of the Whale", referring to the role of the ocean and whale in the world's history. It is also the name of a constellation featuring a whale. It is known as Baten Kaitos: Owaranai Tsubasa to Ushinawareta Umi in Japan.

As the game opens, you are introduced to the lead character, Kalas. You look down at him from the sky. Kalas and you become bonded; you become his Guardian Spirit, a transdimensional entity tasked with looking out for the blue-haired teenager. In addition to controlling his movement throughout the game world, and making decisions for him like talking to people and item shopping, you'll also occasionally be asked for your opinion on character- or story-relevant issues. The level of your agreement or disagreement with Kalas has a slight, if not extremely apparent, effect on gameplay; but more importantly, your inclusion in this manner makes you feel like a member of the party.

Shortly into the game, you'll meet the second in-game party member, a girl named Xelha (pronounced "Shella"). Any thoughts of a torrid love affair between Kalas and Xelha are dashed by the immediate appearance of disparity between their motives and personalities. Xelha is fleeing from official pursuers, and attempting to solve a mystery for the sake of the world. Kalas, on the other hand, is selfish, headstrong, and filled with thoughts of revenge. As the story plays out, Xelha is put in the position of a typical RPG's main character (the one on a noble world-saving quest), and Kalas is something of an anti-hero.

The game world itself is, as legends have it, the result of a near-apocalyptic war with an evil god. Five islands float in the sky: the lush, watery continent of Sadal Suud; the cloud-filled continent of Diadem; the colorful and bright continent of Anuenue; the mysterious continent of Mira, split between dimensions; and the imperial continent of Alfard. Though each continent is independently governed, the Empire has been making aggressive moves, something Xelha believes has a deeper motive.

Along the way you'll meet four other party members (your battle party can be any three): Gibari, a muscular, knightly fisherman; Lyude, an ex-Empire official with musical instruments that are also guns; Savyna, a leather-clad hunting woman with a shady past and few words; and Mizuti, a powerful, masked wizard. It's got the trappings of an epic tale, with a few interesting takes on the classic heroism schtick.

The game is in two discs, and the second disc starts out strong with plot twists and rides like a rollercoaster almost all the way to the end of the game. However, the first disc is all setup for this. Disc 1 is all about becoming familiar with the situation, meeting faces and places, and building events up to where they need to be to really get exciting. While this might seem tedious, the worlds of Baten Kaitos are immersive enough to command any true RPG gamer's attention. It all pays off, as well, when everything that has been building up in the first disc comes tumbling down in the second in a beautiful cascade of emotion. 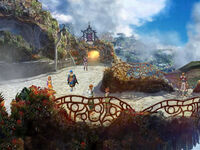 The game looks beautiful. Character models are excellently designed and rendered, and environment backdrops are rich, if difficult to navigate. One of the developers, Monolith, has said the use of pre-rendered 2D backgrounds allowed them to include more detail, and have constant, detailed animation going on at all times. The animation ranges from a bright rushing river, to clouds flowing in place. The great graphics are most evident in battle, which itself is initiated by coming in physical contact with a monster, roaming around the dungeon room. Monstrous creatures, simple but unintrusive backgrounds, and rich, beautiful spell effects make combat a buffet of eye-candy.

Navigating through a continent, as well as walking through towns and dungeons, is handled from a fixed third-person perspective (moving between continents is done either automatically in a ferry-like fashion, or by selecting your destination; you have an airship, but can't actually pilot it).

Each town and continent is brimming with life, from the simplest stream to the most bizarre looking creatures. The colorful worlds are full to the brim with NPC, some which offer clever and sometimes comical comments on the stereotypes of RPGs. Moving Kalas around is easy, as control is near-perfect. Most actions are done with the A button.

The world of Baten Kaitos revolves around magic cards called Magnus that are used to transport goods and carry items, by capturing the Magna Essence of an object in the card. Unleashing this essence is what releases the object for ordinary use. This comes into play in many parts of the game - carrying items for sidequests, solving some dungeon puzzles, even crafting new items (especially with the time-oriented nature of some cards; for instance, milk will become cheese, fruit will rot, a certificate of deposit will gain interest, and some items like coins will even continually flip between states). But by far the most important aspect of the cards is their use in battle.

For the most part, the cards are simply ways of representing choices. Each party member has a Class level, which is distinct from experience levels; their Class level determines the size of their hand, how many cards they can play in a turn, and the size of their deck. The deck, arranged by you from the pause screen between battles, contains all the cards the game randomly picks from when starting a battle. From this hand, the player then selects cards up to the character's maximum number allowed to be played. Cards are played both offensively when the character's turn comes, and defensively when that character comes under attack by an enemy. When almost all the cards in a character's deck have been exhausted (this only tends to happen in longer boss battles), an offensive turn is taken to reshuffle.

Beyond that, the cards operate just like menu choices, with the exception that the offensive and defensive cards are all in the same deck. Therefore it's possible to get a bad hand and be forced to blow a defensive card in an attack turn, or an attack item while defending. But there are strategies in both deck-building and in selecting your play to deal with this, which adds an interesting learning curve to the game (a curve that matures as the game progresses and party members are allowed to play more cards at a time). You only have a few seconds between card choices before the game ends the turn automatically, so in tough situations playing the right sequence of cards becomes a very fast-paced challenge.

Some cards also have elemental values, in one of the six magic elements: Fire, Water, Air, Earth (called "Chrono" in the game and identified by time), Light, and Dark. Elemental values can work against each other, e.g. playing a fire attack and a water attack in the same attack play will reduce the effect of both as their numbers work against each other. The game actually displays a full numeric breakdown of the play after it's over, so you can see what elements worked, what didn't, and what kind of defensive capability the enemy has. The breakdown and the fact that everything in the end is simple math (no dice-roll values involved) make battle effectiveness easy to measure, and thus the game challenges you to attack effectively as if to break a high score.

Cards also have Spirit Numbers. Cards early in the game only have one number, but later cards can have up to four, one in each corner. When you play a card, you select which Spirit Number to use by tilting the C-stick in a certain direction. The numbers work like a traditional playing card game - at the end of a turn, your offensive or defensive play will gain added effectiveness for multiple cards played in the same number, or for an ascending or descending straight. Unfortunately, multiples are only awarded if each card in the play can be paired (e.g. a pair of threes and a four has no bonus), and pairs and straights are the only bonuses, so it doesn't become an exceptionally practical mechanic. But it adds a level of interest, especially early on when plays are small and numbers are easier to coordinate.

Baten Kaitos was produced by Namco around the same time as Tales of Symphonia, and whatever spin you want to put on it, the two games have exceedingly similar soundtracks --- in fact, both of them are composed by Motoi Sakuraba. They both sound great, but one reminds a player illicitly of the other, so if you've played either the sense of a unique atmosphere in the other can be somewhat hampered. Baten Kaitos also has an immense library of voice acting, but the quality of both the acting and the recording falls far shy of Symphonia's. Some of the actors are good, some aren't as much, but the biggest problem is for some is the echo that occurs during the voice acted sequences. This can be easily fixed by switching the sound to surround.

As the story develops and combat becomes more complex, it's apparent that Baten Kaitos is an adventurous project. There's a lot of innovation and creativity in this game, especially in terms of storyline and gameplay. However, a few of the new ideas are either poorly implemented or just duds. For instance, an interesting system for leveling characters up is that players must find a special blue flower, usually in town, to teleport them to a church at which they can pray (pray = gain levels from experience acquired in battle). However, these blue flowers don't exist in dungeons, meaning that if you get all the way to the boss and discover you're not strong enough to defeat him, you can't just hang around and level up until you can take him down; you need to fight your way out of the dungeon, get to the church, and then fight your way back in to try again (which is further complicated by the fact that encounterable enemy parties respawn every time you leave and reenter a room). This problem would have been made worse if the game had random battles like other RPG's. Thankfully you can avoid combat sometimes by running around enemies (although some may chase you if you get in their line of sight).