Battlefield 2142: Northern Strike is the expansion to Battlefield 2142. On January 18, 2007 EA announced that they would develop a booster pack for Battlefield 2142. Northern Strike takes place in northern and central Europe in 2145, 3 years after the war began. The PAC (Pan-Asian Coalition) has set up strongholds in the urban areas left abandoned because of the advancing ice sheets and attacking PAC forces. The EU (European Union) launches an offensive to take back its land from the PAC. This fictional invasion greatly resembles the 1944 invasion of Normandy, whereas Europe was finally reclaimed by Allied Forces after an invasion expedition had arrived.

The expansion adds two new vehicles (IFVs, or Infantry Fighting Vehicles): the Hachimoto IFV for the PAC, and the Goliath IFV, a heavily armored urban warfare vehicle, for the EU.

The Hachimoto is an extremely fast hover vehicle. Its hover ability, paired with its speed, makes it a challenge to control without practice. It shares the FAV's speed boost function, giving it a well known hit-and-run element, this makes it especially lethal to the EU's slow and cumbersome Goliath. It also has very weak armor; it is only resistant to small arms fire. The driver and gunner are also completely exposed to enemy fire. It features driver-operated cannons similar to but much weaker and less accurate than the auto-cannons on the PAC battlewalker, this a trade-off for the splash damage it has, curiously these guns also feature aircraft 'lock-on' rings when pointed at enemy aircraft but features no actual lock-on. The gunner seat features a high-speed grenade launcher and a remote-guided missile launcher like the one in the gunner seat of the gunships, however many people find it easier to control.

The Goliath is similar in size and shape to an APC, but has significantly stronger armor that continuously regenerates. The armor’s regeneration is generated by seven repair cells located on top frontal area, back and sides of the Goliath. The cells are electric blue and glow while making repairs, otherwise they lie dormant. These consoles are easily destroyed, requiring only a single rocket or missile (the reward being 'Points for Destroying a Strategic Point or Object'). As each repair cell is destroyed, the Goliath's ability to regenerate armor is diminished, making the vehicle much easier to destroy. The Goliath's frontal armor has a number of notable qualities. First and foremost being that it can withstand an extremely high number of anti-vehicle motion mines and sustain absolute minimal damage (which is then repaired). This allows it to clear minefields for other vehicles behind it. This same quality also makes the forward armor much more resistant towards rocket and turret fire than the rest of its body. However this armor is balanced out by the fact that if it is hit anywhere else by a motion mine it may destroy as many as two repair consoles per hit. In the teaser trailer, the Goliath is shown completely unscathed from an EMP strike, orbital strike, a number of blows from infantry missile launchers, and even a head-on collision with a FAV. The Goliath also operates similar to an EU APC, except without the pods and different guns; both vehicles have weapons for each passenger. The Goliath driver's weapon consists of a scatter-cannon and a launcher for an upgraded motion mine that explodes when a vehicle comes too close, or on impact with an enemy vehicle. The passenger weapons are two normal machine guns in the rear, and two explosive projectile cannons in the front that do not damage armored vehicles but have splash damage and are highly lethal to infantry. The rear guns have infinite ammunition while the forward cannons will eventually run out and overheat relatively quickly. The Goliath is only available in Assault Lines mode in Northern Strike. 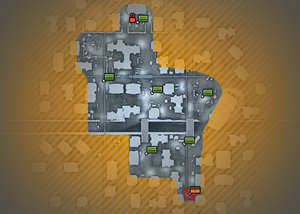 The 64 Player map Liberation of Leipzig

Northern Strike offers three new maps, Bridge at Remagen, Liberation of Leipzig, and Port Bavaria. The new maps which are the only available maps for Assault Lines, are the only maps that spawn either of the new vehicles, and feature large numbers of Battlewalkers but no tanks. They also feature a new "Horizontal Pod Launcher" structure that functions similarly to the Pod Launchers found on the Titans (but with reduced range).

Assault Lines mode is similar to Conquest, but with a couple of major differences. Most asymmetrical conquest maps feature the PAC as the attacking force with the EU defending, whereas Assault Lines reverses the roles. In Assault Lines, all APCs plus the Goliath are considered spawn points, much like they are in Titan mode. Finally, the PAC home base cannot be captured like a normal flag. Rather, every other spawn point must belong to the EU team before they can begin claiming the spawn as their own. Completion of this rewards a special pin to those playing as EU at the time, players who switch teams after the home base has been captured do not receive the pin.