Contrary to popular belief, Battlestations Midway is not a shoot-'em-up kind of game. It requires fast yet decisive moves for most maps. Act too slow and you're prone to being overrun quickly. Act too quickly and you will find your units will not behave the way you want them to.

The tactical map at maximum magnification. Notice the gun emplacements surrounding the bay.

The Tactical Map, shortened in-game to "TacMap", is essentially the RTS element of Battlestations Midway. It is a very rudimentary RTS, with few advanced AI controls and no base or resource management whatsoever. However, the tactical map allows you to spot any enemy ships, planes, or subs under your detection range (submerged submarines are invisible unless detected by a destroyer's sonar).

The Tactical Map can also prove to be a very useful source of information. The map can be zoomed in up to three times, each time revealing more information.

At outermost zoom the map reveals very little. On the other hand you can see the entire battlefield all at once. At outermost zoom, only the lead ships and planes are shown.

At middle zoom, individual aircraft are hidden, but all ships are shown.

At maximum zoom, individual aircraft, land-based gun emplacements, and even torpedoes are among the many things the TacMap reveals. The TacMap's ability to detect torpedoes at long distances allows you to make manoeuvres earlier.

The TacMap can be toggled on and off at any time via the Tab key or through the Back button on your Xbox controller.

Battleships are the kings of naval artillery.

Ships are the core of any major engagement on Battlestations Midway; in fact, only one multiplayer map contains no ships whatsoever.

Unlike an RTS, ships cannot be replaced under normal circumstances. Ships can be launched through a shipyard, but very few maps have them, and the ones that do are often of a small variety that launches only patrol boats or recon planes. Ships therefore must be protected at all times; they are not as expendable as planes are.

Destroyers are also effective against other destroyers.

Ships come in several varieties. The playable versions are outlined below:

Other ships include the AK (cargo ship), but they are not playable under any circumstance.

Ships have four main weapons systems. Not all ships, however, have all four; in fact, only destroyers and the Japanese PT boat have all four weapon types.

Torpedoes allow destroyers to attack targets much larger than they are.

Patrol boats can attack any ship, but their lack of armour limits their usefulness.

PT boats are one of the most versatile ships in the game. Their AA armament is very powerful, and they sport a two (Japanese) or four (American) torpedo arrangement, allowing them to harm ships of any size. They also have depth charges capable of annihilating submarines. Although they are impervious to torpedoes, they are vulnerable to machine gun fire and tend to end up in pieces very often.

Destroyers are the next fastest ship. While considerably larger than PT boats, they are impervious to machine gun fire and sport reasonably powerful artillery. They are unique in that they have powerful long-range sonar that allows them to detect enemy submarines. Their main cannons for the most part also double as flak cannons, making them powerful anti-aircraft platforms. Destroyers also have powerful torpedoes.

Cruisers and battleships constitute the heavy guns of Battlestations Midway.

Cruisers come in the light and heavy flavours. Depth charges have been removed in favour of additional armament. Most Japanese cruisers have torpedoes, but only the York and Atlanta heavy and light Allied cruisers have them. In general, the American light cruisers are better than the Japanese, but the Japanese heavy cruisers are superior to the Allies'.

Battleships are considered by many to be the kings of naval artillery. While most consider a submarine to be a battleship's main adversary, in truth a battleship's main enemy is actually another battleship. This is because once they're locked in combat, it's impossible for a battleship to retreat as doing so would pose an easy target.

Carriers have only anti-aircraft armament, but their main weapon is obviously their massive wing of planes. Carriers do not have much armour and can be easily sunk if in weapons range of any ship. 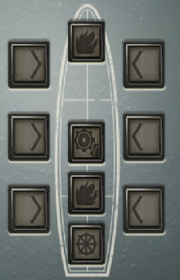 The ship status panel. Leaks are the arrows on the sides; fire, engine, and rudder indicators are centre.

When struck by various types of ammo, ships suffer damage to various components. There are several major malfunctions; when a section has suffered 100% damage, the section is destroyed and may or may not be able to be repaired.

Through the repair screen, ships can order one, two, or all of its three repair teams to tackle each emergency type. 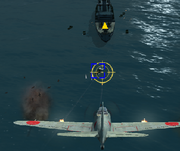 Aircraft come in several varieties. Aircraft also can manoeuvre in a full 360 degree motion. BSM is not a rail shooter by any means, and allows a player full control of a plane's pitch, yaw, and roll capabilities while simutaneously not having to deal with smaller issues like wind or G-forces.

Submarines are slow, but their stealth and power are unmatched.

Submarines are very dangerous adversaries. Submarines are among the slowest unit in the game, but their torpedoes pack quite a wallop. Considering a typical submarine sports over 30 torpedoes, a single submarine can sink an entire enemy fleet single-handedly if given the right support.

Torpedoes are also highly ineffective against enemies at long range, and take a LONG time to reload. Their ability to hide underwater, however, makes them impervious to cannon fire (unless on the surface) and as such are devastating enemies to battleships.

Submarines do not have a lot of armour and can easily be fried by depth charges (plane-dropped charges can easily fry a submarine). Therefore subs require a lot of micromanagement and are best left to skilled players.

The Japanese cruiser Mikuma goes under after being torpedoed four times.