The SNES version of the original Battletoads game. It was a much better version due to the superior hardware of the SNES. It includes better graphics, better music and less difficulty. There is also a version for the Sega Master System. 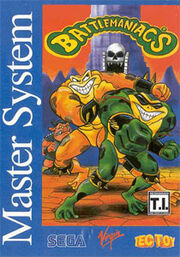 Zitz and the daughter of Psicone Industries' CEO have been kidnapped and Rash and Pimple must save them from the Dark Queen.

In the end, after eliminating the Dark Queen, the player must get rid of her spaceship.

It resembles the first Battletoads more than the second game: it has a motorcycle, a rat race, a Clinger-Winger-like level, a vulture pit and a tower. It is hard but not as hard as the first game, because this one has fewer levels. It does not have any warp levels for this reason. It also had two bonus levels.

It is a little more violent than previous games. Pimple attacks include hitting with a junk and stomping the enemies. The sound is superior to its predecessors.

Get more info at the Battletoads Wiki