Bayleef (ベイリーフ, Beirīfu, Bayleaf in original Japanese language versions) is one of the 493 fictional species of Pokémon from the Pokémon Franchise - a series of video games, anime, manga, books, trading cards and other media created by Satoshi Tajiri.

Bayleef's name is a reference to the "Bay leaf", the aromatic leaf from the Laurel plant family.

Bayleef looks like a cartoonish sauropod. It has a pale yellow body supported by four legs and a rather long neck and tail. On top of its head is a single large leaf and around its neck are seven oval-shaped, flower buds.

Bayleef's most defining trait is the "necklace" of seven tubular leaves that is located around its neck. Each of these curled up leaves contains inside it a tree shoot. From these leaves wafts a spicy scent that has stimulating properties to those who smell it. It can cheer people up, restore their health, make them more energetic and even heighten their drive for competition. It's name is inspired by the bay leaf.

Bayleef is one of the Pokémon that Ash has used in his team. It evolved from Chikorita in episode #201 (Current events). Like its pre-evolved form, Bayleef feels a strong bond of affection towards its trainer, which it usually expresses by trying to climb all over him, a matter complicated by the dramatic increase in mass. One memorable moment was when Bayleef won a race involving Ash riding a skateboard with Bayleef piloting it, beating Gary's Arcanine. Ash used Bayleef in many battles in Johto, including a gym battle in which it beat a Poliwrath and a Machoke. Ash also used Bayleef in the Johto League, where it battled against Gary's Blastoise, but lost, and against Harrison's Houndoom, and won. After Bayleef beat Houndoom however, it was defeated by Harrison's Blaziken. Bayleef is currently at Professor Oak's lab since Ash decided to make a fresh start when going to Hoenn, and therefore, left all of his Pokémon, except Pikachu with Professor Oak.

In Pokémon Special Crystal's Chikorita evolves into a Bayleef. 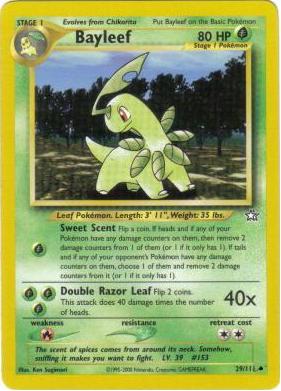 Bayleef appears in the following: