Beedrill (スピアー, Supiā, Spear in original Japanese language versions) is a poisonious bee that is both fast and vicious. The name Beedrill originates from the words bee and drill. Its name in the English beta version of Red/Blue was “Beedril”. It evolves from Kakuna. Beedrill resembles an enormous hornet with four legs (instead of six like real hornets). It has a pair of large, sharp stingers at the end of its forelegs, and a large striped abdomen with an equally imposing stinger (which secretes its most powerful venom). The rare, shiny version of Beedrill is a green-yellow, like its pre-evolved form, Kakuna.

Beedrill resembles an enormous hornet (most likely inspired by the Asian giant hornet that is native to Japan) with four legs (instead of six like real hornets). It has a pair of large, sharp stingers at the end of its forelegs, and a large striped abdomen with an equally imposing stinger (which secretes its most powerful venom). The rare, shiny version of Beedrill is a green-yellow, like its pre-evolved form, Kakuna.

Beedrill are known to collect pollen which they use to make honey. Beedrill's nest is often attacked by Ursaring for their precious honey. It is rumored that Vespiquen live in their hive.

No one who values his or her life should ever approach a Beedrill nest, for Beedrill are extremely territorial. If angered, they will attack in a furious swarm, and the sharp ends of their stingers and the poison stored in their abdomens will definitely be put to use.

Beedrill are not generally found in the wild, appearing only in a few locations within the Johto region. In GSC, Beedrill can be caught in the Bug Catching Contest in the National Park. Otherwise, Beedrill must be evolved from Kakuna. In Pokémon XD, a Shadow Beedrill can be snagged from Cipher Peon Lok. It is one of very few evolved Pokémon to reach its final form as early as level 10, many of which are Bug-type Pokémon.

Additionally, Beedrill has a cameo in Super Smash Bros., occasionally emerging from thrown Poké Balls and summoning a swarm of its brethren to attack opponents.

Beedrill first appeared in the Pokémon anime in the Viridian Forest. A swarm of Beedrill terrorized Ash Ketchum, even abducting his poor Metapod. They were finally defeated when it evolved into Butterfree and used its Sleep Powder. Beedrill appear occasionally throughout the series to chase the main characters or Team Rocket.

In the Indigo Pokémon League competition, Ash faced a competitor named Jeanette Fisher, who had a highly trained Beedrill, but his Bulbasaur managed to beat it without too much trouble.

During the Bug-catching Contest at the National Park in Johto, Ash caught a Beedrill. He won first place with it, and received a Sun Stone. At the end of the episode, he gave the Beedrill to his friend Casey (a minor recurring character best known for her love of baseball), knowing she collects yellow-and-black Pokémon.

Two Beedril make a brief appaerence in the 9th movie.

In the Pokémon Chronicles adventure “The Legend of Thunder”, Jimmy has a Beedrill, which he has apparently been training since it was a Weedle, one of his first catches. He uses it in a match against Marina, and it later helps him rescue her and thwart Team Rocket. Jimmy's beedrill's Pin Needle is strong enough to destroy machines and can avoid sound-based attacks by drowning out the noise with its wings.

In the manga Pokémon: The Electric Tale of Pikachu! and Electric Pikachu Boogaloo, which (very) loosely parallel the storyline of the anime, Ash chased a pack of Mankey using his Fearow, accidentally knocking one into a Beedrill hive. The swarm emerged to give chase, and Ash apparently caught one off-panel, though he was never seen to use it. Later, in the Indigo League tournament, Bulbasaur took down Jeanette’s Beedrill with Leech Seed, just as in the anime. In Pokémon Adventures, Giovanni owns a Beedrill. It nearly killed Red during their confrontation, but was knocked out by his Aerodactyl. Years later, Giovanni returned and used Beedrill to battle Lance of the Elite Four. 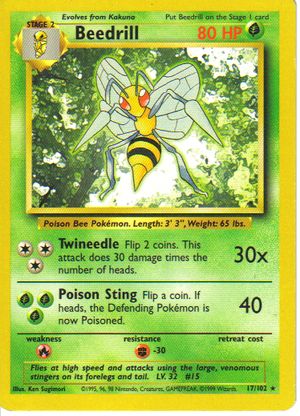 Beedrill also has a healthy showing in the Pokémon Trading Card Game. Its appearances, all as stage 2 grass-type cards (save the most recent), were in: the Base Set, Gym Challenge (as Koga’s Beedrill), Neo Discovery, Pokémon *VS twice (as Bugsy’s Beedrill and Janine’s Beedrill, both basic Pokémon), Skyridge, EX FireRed and LeafGreen, and EX Delta Species (as Beedrill δ, a Steel/Grass-type). The Neo Discovery Beedrill was the first Pokémon to inflict a special kind of Poison condition that does 30 damage each turn instead of the usual 10. All Beedrill cards are rare, printed in limited quantities.