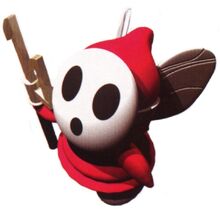 Beezos appear in large groups, trying to skewer Mario and his friends with their tridents. The two ways to defeat a Beezo are to throw Vegetables at them, or jump on their back and pick them up to throw the helpless Beezo.

Called Shy Aways in this game, these enemies are found at the Land's End and at Bean Valley. Beezos flee intruders instead of attacking them like most enemies.

One Shy Away plays an important role in the game, as a helper to Valentina. After constant attempts to rid the Mario Bros., the Beezo flees the scene after each failed attempt.