Bellsprout's name is derived from the words "bell", referring to its bell-shaped head, and "sprout", which is a young plant growth. "Bluebell" may be another influence on its name. It may be of interest to know that "mada" means "still" and "tsubomi" means "flower bud", hence, its Japanese name: "madatsubomi". Bellsprout has more recently gained notoriety for it's parody series on YouTube.

Bellsprout is a carnivorous, plant-like Pokémon, hunting small insects with blinding agility despite its skinny body. It tends to ensnare its prey in its vines and devour it, in much the same way as real carnivorous plants do. Bellsprout's preferred habitat is warm and humid climates, since it can absorb more moisture from the ground when planting its root-like feet inside it.

In battle, Bellsprout can take advantage of its flexibility to bend and sway its way out of the range of its opponent's attacks, no matter how powerful they may be. However, it will be helpless to escape if it decides to plant its roots in search of water. In terms of offense, Bellsprout can spit out of its mouth a highly corrosive fluid that can melt even iron.

The shiny Bellsprout has golden leaves.

Bellsprout are used by a large number of trainers throughout Pokémon Red and Blue, usually used by trainers with the grass-type specialty, but sometimes used by trainers with a mix of special Pokémon. Wild Bellsprout can only be found in Pokémon Blue to the north of Vermilion City and the south of Saffron City. In Pokémon Red, it can only be obtained through a trade, or a cheating device. Bellsprout can also be obtained through various areas in Pokémon Gold, Silver and Crystal.

For a basic Pokémon that can evolve twice, Bellsprout's offensive stats are particularly good. It suffers, however, in most other attributes, being rather slow and weak defensively. Bellsprout learns naturally many status-inflicting skills, which can counterbalance its fragility, as well as some moderately powerful Grass and Poison-type attacks. Generally its evolved forms Weepinbell and Victreebel are used in battle, although sometimes a lowly Bellsprout can prove surprisingly competent.

In Pokémon Gold, Silver and Crystal there is a tower named after Bellsprout: The Sprout Tower. The tower is located in Violet City. In the tower you can obtain HM05 (Flash) after defeating the elder sage of the tower. You will also meet your rival here but he won't fight you there.

Bellsprout's first and probably most noteworthy appearance was in episode #77 (Fourth Round rumble). It appeared under the control of a trainer named Jeanette Fischer, who faced Ash at the Indigo Pokémon League in a 3 vs. 3 match. Bellsprout was Jeanette's last Pokémon, but despite its unassuming appearance it managed to knock out Ash's Bulbasaur and even his Pikachu. Ash claimed victory when he sent out his Muk.

Bellsprout also appeared in episode #132 (A bout with Sprout), which took place in Sprout Tower, Johto. A little boy called Zack caught one while trying to capture Ash's Pikachu. Another Bellsprout, nicknamed "Spoopie", was used in episode #172 (A Better Pill to Swallow) by an old man to sniff out Shuckle's location. Bellsprout also appeared in the episode, "You Said a Mouthful," in which the bogus gym leader, Anthony, hides Bellsprout in the mouth of his Pelipper to make it look like it can use grass-type attacks.

In Pokémon Special Bellsprout makes a cameo in the Red, Green & Blue chapter in ...But Fearow Itself! when Red remembers capturing one.

A sextet of Bellsprout is seen in Volume 8 during Gold's visit to Sprout Tower. Gold is attacked by the monks and their Bellsprout in an attempt to convince him to join their group. The excellent teamwork of the Bellsprout manages to make short work of Gold's Aipom, only to lose to Gold's Cyndaquil when it incinerates them from below. 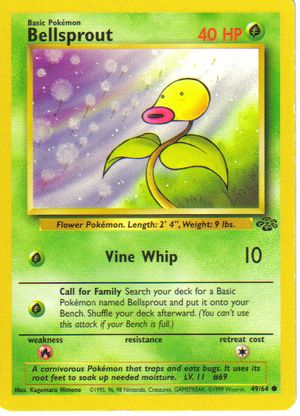