Blastoise is a water Pokémon, the final stage of evolution of Squirtle. It is evolved from Wartortle at level 36. Because it comes from a starting Pokémon, it is a recognisable and popular one. It's name comes from an amalgamation of the words "blast" (referencing the water cannons on its back) and "tortoise". It is notable for it's high defense levels.

Blastoise is a very large, blue, turtle that can extend cannon-like spouts from the top of its shell with a jaw similar to that of the snapping turtle. The cannons are used to fire blasts of pressurized water at foes, and can spray with enough force to pierce concrete walls and thick steel. They are also highly accurate, allowing Blastoise to hit small targets at distances of over 160 feet. However, Blastoise is unable to aim at short distances[1] as this handicap was shown in the battle between Ash's Charizard and Gary's Blastoise. They can pump out enough water to fill 3 Olympic swimming pools within one minute. In order to withstand the recoil of its fire, Blastoise positions its feet and plants itself with its considerable weight, which it has cultivated for this purpose. The ferocity of its attacks has caused Blastoise to be described as “brutal”, and even its normal attacks, like waterjet-assisted tackles and crushing heavyweight body slams, are completely devastating, even though the creature is reasonably lightweight and fast compared to the "real" heavyweighters of Pokémon. When it does feel threatened by something, it withdraws into its shell for protection. Blastoise is a Pokémon that is very strong, no matter what, and will sacrifice its life to save a trainer. It evolves from a Wartortle, before that, a Squirtle.

Blastoise is also the leader of a Bronze-level rescue team named Team Hydro in Pokémon Mystery Dungeon. His team includes Swampert and Feraligatr, making his team the toughest of all rescue forces found in Makuhita's Dojo. In the game, he forms a temporary rescue team with Octillery and Golem to save Alakazam's team from Magma Cavern, but fails shortly after. Later, he teams up with Charizard from Alakazam's team to explore the Western Cave, but the pair is soundly beaten by Mewtwo after Blastoise accidentally woke the Genetic Pokémon up. He also appears in a cutscene after the player recruits Lugia which leads to another dungeon, Meteor Cave, being unlocked. In addition, other Blastoise can also be encountered by the player in Western Cave, and unlike most other fully evolved Pokemon, can be recruited, but the player's Pokemon must be at an extremely high level and holding the item "Friend Bow", and even then the chances of the player getting a Blastoise to join him/her are extremely low.

Blastoise is also a usable character in: "Pokemon Battrio", a new Arcade Game, bringing along 4th generation Pokemon from: "Pokemon Diamond and Pearl".

Blastoise was first seen on the Island of Giant Pokémon, although it later turned out to be a robot. The first real Blastoise was seen in “Beach Blank-Out Blastoise”, ruling over a group of Squirtle and Wartortle. Jigglypuff had become lodged in one of Blastoise's cannons, therefore causing the latter to sleep indefinitely. During the Johto Saga Another Blastoise battled Ash's Pikachu but was defeated.

Blastoise was finally revealed as the evolved form of Gary Oak’s starter Pokémon during the Johto League Silver Conference championships. Although it defeated Ash's Heracross, Bayleef, and almost Muk however, despite its type disadvantage, Ash's Charizard was able to defeat it.

Blastoise are also owned by Cissy, a member of the Orange Crew; and Brock’s mother Lola, who turned the Pewter City Pokémon Gym into a Water Gym until Brock defeated her and restored the Rock Gym (in Pokémon Chronicles). Another Blastoise (who was cloned by Mewtwo) was featured in the first movie, Mewtwo Strikes Back, along with a "real" Blastoise owned by a trainer by the name of Neesha invited to Mewtwo's castle whom she nicknamed Shellshocker. In Hoenn, a Blastoise was seen in the Verdanturf Town Pokémon Contest, and Ash and friends watched a Wartortle evolve on an island just off the coast near Lilycove City. In the Johto saga A Blastoise enters a sumo contest but is eventually defeated by a Feraligatr. Later on in Hoenn, an Officer Jenny mentions that "this looks like a job for my Blastoise", but a Nurse Joy warns her that it might put out the flame Team Rocket stole.

Blastoise was also seen in the squirtle fire fighter squad on numerous occasions.

Blastoise and his evolutions specifically have moves and behavior in the anime that is directly linked to the movie monster Gamera. Their Rapid Spin technique is identical to Gamera's as they pull into their shell and fly, spinning like a flying saucer, through the air.

In the Pokémon manga[edit | edit source]

Blastoise is the fully-evolved form of the Squirtle that Green stole from Professor Oak in the Pokémon Adventures manga. As Green is terrified of bird Pokémon, she has no Pokémon that Fly, and must use other methods to engage in aerial combat (and for aerial transport). One of these methods involves Blastoise propelling itself upward by aiming a Hydro Pump attack from the cannons on its back toward the ground. 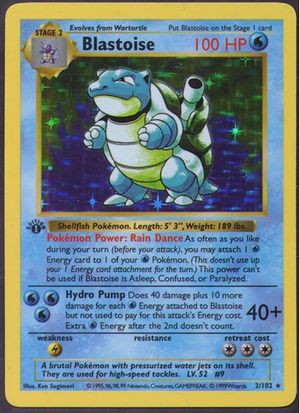 Blastoise comes close to Charizard as one of the most prolific Pokémon in the Pokémon Trading Card Game, making appearances in the Base Set (included in Base Set 2), Team Rocket (as Dark Blastoise twice, one of which was included in the Legendary Collection), Expedition (three times), Pokémon *VS (as Clair’s Blastoise, a basic Pokémon), The 7th Movie Half Deck (as Shota’s Blastoise, a basic Pokémon), EX FireRed & LeafGreen (as Blastoise EX), the POP3 promo set, and EX Crystal Guardians (as both Blastoise and the Fighting/Steel-type Blastoise δ). Its first appearance in the Base Set was a staple in Water-themed decks, because it has an extremely strong Pokémon Power, Rain Dance (which probably inspired the GB game technique in the second generation.). Rain Dance allows the player to attach as much Water energy as desired to his/her Water Pokémon during his/her turn. (Normally, players are restricted to attaching one Energy card per turn.) Blastoise EX has a similar Poké-Power, Energy Rain, which allows the player to attach Water energy to any of his/her Pokémon, but does 10 damage for each Water energy attached.