Bloons (a derivative of "Balloons") is a series of online video games based around a war between these 'bloons' and monkeys, with fairly unrealistic powers on both sides. There are various sets of games within the series, including the Bloons series, the Bloons Tower Defense series, and several other spinoffs on the original games. Mainstream development in these series occurs for browser-based games using Adobe Flash; but many of the games have also been made available on other platforms. 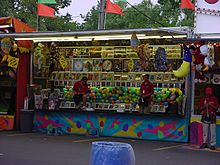 The traditional "Balloon and Dart" carnival game provided the inspiration for the original Bloons game.

The first Bloons game was developed by Stephen and Chris Harris, two brothers from New Zealand.[1] Prior to working on Bloons, the pair had released Cash Sprint - a successful racing game that incorporated weekly prizes. After the success of Cash Sprint, they developed their own web portal for flash games, but failed to gain the necessary traffic. Instead they decided to focus on their own games, and launched a website – Ninjakiwi.com – with five of their own games. The site was a success, and this led to their work on Bloons.[2]

The basic concept for Bloons came from Stephen's wife. When Stephen asked her what would be fun in a new game, she brought up carnival games with darts and balloons.[2][3] The first version was developed quickly, and the game was released in April 2007. It proved popular, especially after being picked up by Digg, and soon reaching approximately 100,000 players per day.[2][4] By 2011 the game had been played over 3 billion times.[4]

The Bloons series is the original grouping of games developed under the "Bloons" name. In all of the main games, the goal is for the player to clear the playing area of all Bloons (which, as implied, have similar traits to balloons) using a limited number of darts. The player is able to choose the power, aim, and other factors involving the launch of darts; and hence the path it will follow and what Bloons it will pop. There are many sequels and spinoffs of this series, with large fan support (indicated by the "player packs" discussed later).

The games consist of various levels, each with a different and unique layout of Bloons. On each, the player is given several darts used to pop the Bloons on the screen. The fewer darts the player uses, the better his or her score for that level. There is much strategy involved, especially since some Bloons have special powers or affect the player's darts in both helpful and hindering ways. For example, when some Bloons are hit, they provide the player with 3 darts to fire at once during his next shot. Others have an area blast effect (again, when hit) like a bomb. As new games in the series developed, more and more aspects of the game were expanded upon with many new Bloons and levels being introduced. There are also several "player packs" - groups of levels developed by players of the Bloons series.

Games in the series[edit | edit source]

In the Bloons Tower Defense 5 series (often abbreviated Bloons TD or BTD), the main objective of the game is to pop the enemy Bloons before they reach the end of the path on the game screen. The player has various types of towers at his disposal to defend against the Bloons; including Dart Monkeys, Tack Towers, Ice Towers, Cannons, ninja monkeys, boomerang monkeys, sniper monkeys, and the powerful Super Monkey.[5] There are also other types of towers, introduced in later editions of the game. All of the aforementioned towers are purchased with in-game money which can be earned through various means. There are many types of Bloons, the Red Bloon being the weakest; the tougher variants each contain one or more weaker ones, released when the containing Bloon is popped. For example, the Yellow Bloon contains a Green Bloon, which contains a Blue Bloon, which contains a Red Bloon. Depending on the difficulty and version of the game, the player has a certain number of "lives" available. Different types of Bloons consume different numbers of lives if they escape, based on the total number of Bloons contained inside. Different bloons, however, have special attributes. A lead bloon is immune to sharp things, and black bloons are immune to bombs as whites are to ice.

Bloons Super Monkey 2 (often abbreviated as BSM2) is the most recent Bloons game to date. The objective is to achieve at least the bronze trophy in all 20 stages using upgrades and research, as well as beat all four bosses.

Tech media website CNET reported favorably on the Bloons Tower Defense games for iPhone, describing it as having "nearly everything from the beloved Web-based classic". The article reflects negatively on the controls, stating that "[they] are a little finicky", but overall their impression is positive, saying that the game is an ideal introduction to the tower defense genre for young children.[6]