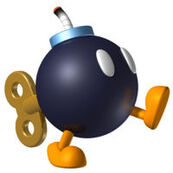 In the Super Smash Bros. series

In the Paper Mario series