Bomberman: Act Zero is a 2006 game for the Xbox 360, part of the Bomberman video game series. The game redesigned the Bomberman character to look like a cyborg. The player can choose between a male or female Bomberman, as well as its armor color.

Bomberman act zero has ninety-nine levels. Once you die you return to the title sequence. There are two different modes camera modes Standard, which is the typical overhead view in bomberman games. The second mode is the FPB mode which give a third person perspective in which the player is able to rotate the camera with the analog stick. Bomberman Act Zero is also able to support eight players online. Bomberman also has a health bar instead of lives. 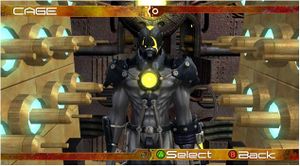 Bomberman Act Zero is called one of the worst games for the Xbox 360. The game is often criticized for its long load times. The game also has horrible hit detection. Bomberman Act Zero strays away from the rest of the Bomberman series by having a dark futuristic environments. The game does not feature a local multiplayer, in which individuals can play against a friend by plugging in another controller. Individuals also complain that you once you die you will return to the title screen no matter which level you are on. The balance of the AI also poses a problem. The skill of the AI is either really idiotic in which they blow themselves up or so advance that they are hard to beat. There are also very few powerups and uses the same textures for each level's maps.