Border Down (ボーダーダウン?) is a horizontal scrolling shooter arcade game created by G.rev in 2003. It is a spiritual sequel to Metal Black, a favorite game of creator Hiroyuki Maruyama. As with most other Sega NAOMI titles, the game was later released on the Dreamcast in September 2003 in two incarnations: a normal edition, and a limited edition that came bundled with a music CD and alternate cover art. Border Down was G.rev's second independent game (though they did subcontracted work on other titles, most notably Ikaruga and Gradius V), released after Sega's official discontinuation of the Dreamcast console.

In the distant future, humanity has entered a golden age and has colonized Mars. One day, contact was lost suddenly from an asteroid mining station. This was found to be caused by an invading hostile extraterrestrial force known as F.A. (First Approach ). To defend against the aggressors, the Solar System Defense Forces developed and deployed the R.A.I.N (Remote Artificial Intelligence Network), a remote guidance system for the Antares-xx, an unmanned combat vehicle.

Instead of receiving a set number of lives, a player has the option to start on any "border" at the beginning of the game. Whenever the player dies, a "border down" occurs and the game continues onward on the next hardest difficulty. This puts increasing pressure on the player to stay on the green (easiest) border. Conversely, a player can opt to start at the red "border" for the maximum challenge. The game ends if the player dies while on the red border. 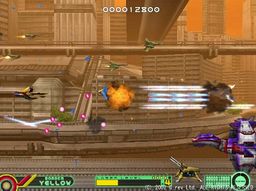 Gameplay screenshot from stage one

At the bottom of a screen is a laser power meter that progressively fills as enemies are destroyed. Initially the lasers are at level one and can increase up to level five.

During the use of the break laser, the vessel becomes invincible and all enemy projectiles can be destroyed. Each enemy projectile destroyed by the break laser increases the hit counter by one. At the end of a level, this hit counter is multiplied by 5000 and added on to the score as a bonus. This scoring system is unique to Border Down and encourages the player to take risks. In most games, the player is usually motivated to eliminate bosses as quickly as possible, whereas the goal here is to utilize the time given to attain a higher hit count. If the player exceeds a certain score defined by levels, it can go up to a different border before the beginning of the following level.

Although G.rev had previously produced an arcade puzzle game, Doki Doki Idol Star Seeker, Border Down was the project G.rev formed to make. Upon establishing his independent company, G.rev president Hiroyuki Maruyama lamented that he didn't have the finances to fund his vision. By doing subcontracted work for Treasure and Taito, and releasing a simple puzzle game, G.rev was able to generate the revenue needed to create Border Down.

The concept of Border Down owes much to the Taito classic Metal Black. Although many G.rev employees were formerly a part of Taito's arcade division, none of them worked on Metal Black except for composer Yasuhisa Watanabe. Rather, Maruyama was simply a big fan of this game. In an interview for French television, Maruyama said that all he wanted was to make Border Down, and if the company collapsed after this, he would have been content.

Border Down experienced moderate success in Japanese arcades, and after a few months of strong sales, a port was announced for the Dreamcast. Upon its release it received minimal press attention, with a few mixed reviews to its credit, earning a 6 out of 10 from UK magazine Edge, and an 8 out of 10 from Japanese publication Dorimaga.

Despite the late release on a "dead" platform and underwhelming critical response, Border Down quickly sold through its initial 10,000 copy print run (of which half were the "limited edition"). Shortly thereafter another 5,000 copies were pressed, and eventually sold out as well.

Since that time, Border Down's reputation with fans has grown, and it has become a hot collector's item, commonly fetching prices as high as $120 on online auctions by 2007. In response to this demand, G.rev announced in January 2008 that they would be do another print run of an undisclosed (but presumably small) number of copies for sale at the Akihabara-based retailer Messe Sanoh.