Brutal Sport Football released in 1993 by Millennium Interactive Ltd was similar to Speedball 2 in many ways, this is an ultra-violent sports game. It uses an oval ball which can be thrown or kicked, often resulting in unusual up-and-under type kicks. The gameplay is fast and flowing, and has one rule - if you can't get the ball, get the man, and decapitate him if possible. There's a lot of blood and flailing limbs, giving things a gruesomely humorous edge. There are four leagues to progress through. 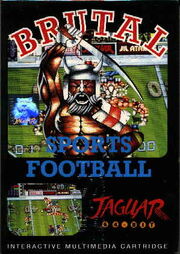