According to the NES version's manual, this game would supposedly star Bub and Bob as the original duo. However, the protagonists are actually intended to be Cubby and Robby, their descendants (hence the name "Junior" used both in the NES game's bonus rounds and in the alternate title of the GB port - see Notes for more information). 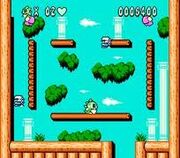 As seen in the game intro, Cub, and a girl named Judy, were sitting in a park. Suddenly, a floating skull character captures Judy into a bubble, and sends her and Cub into the air. Two characters named Drunk (from the original Bubble Bobble) follow the skull and take Judy away. Cub turns (or is turned) into a bubble dragon and heads off to rescue his girlfriend. There is also a two-player mode, implying that Rob has suffered the same events as Cub had. However, the manual states that Judy is a friend of both.

In the Game Boy version, Rob has to rescue people from a village, who, according to this version's intro, have been captured by the skull character.

Because of its late release on the NES, Bubble Bobble Part 2 is exceptionally hard to find and is sought after by collectors. Loose copies of the game routinely sell on eBay for between $100 and $150. Complete-in-box copies of the game carry prices ranging between $300 and $400 on eBay and Amazon.com.

The game was only available on the rental market, making it difficult to find even at the time of its release.